During the recent floods, weather presenters and news reporters were repeatedly heard to say "more heavy rain is forecast and where this rain falls on saturated and waterlogged land there is the risk of flooding" - very true.

Subsequent reports have then focused on flood defences and how to get rid of the water more quickly. Even today, attention is focused on dredging.

But, for a different perspective, just look again at the opening statement "where this rain falls on saturated and waterlogged land there is the risk of flooding" - true.

But what happens when rain falls on land that is not saturated and waterlogged?
Answer: nothing!

Unsaturated land acts as a sponge and soaks up water. If all the land in Britain could act as a giant sponge, it would soak up enormous quantities of rainfall. This would significantly reduce the uncontrolled surface run-off of water which is what causes waterways and rivers to flood.

So, how do you make land act as a sponge? You drain it!

What! Surely that makes the problem worse? Wrong! 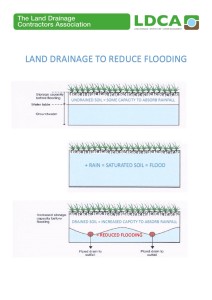 A little bit of soil science tells you that if you lower the water table then you increase the capacity of land to store water. Also, this stored water bleeds off slowly through the land drainage which greatly extends the run-off period and reduces flooding significantly. What's more, this could be far more cost effective than building flood defences, barrages and all the other downstream measures being discussed.

Drainage of land is very straightforward and can readily be done by a long- established and experienced land drainage industry.

Naturally the water drained from land has to be held but this can be done in a controlled way in watercourses, ponds, lakes, reservoirs and wetlands before it even reaches rivers. These can be used to slow water down to prevent it rushing overland into towns and flooding built-up areas.

Ditches which take the water from drained land can have mini weirs to hold the water in the ditch during periods of high rainfall. Further downstream these can discharge into ponds which, on a larger scale, can be lakes. To be really sustainable, these can be used as reservoirs to hold water for irrigation during the drier summer months - the water can even use the drainage system for subsurface irrigation - the ultimate recycling of water!

By controlling the rate of discharge of water from these upstream measures you don't need to deliberately let land be flooded downstream as sacrifice areas to protect built up communities.

There is nothing new in this. Many of the measures taken by our forefathers were designed to hold water back before discharging it at a slower rate. Dew ponds were a common feature, along with village ponds, which filled up in winter and dried out in summer, and a network of ditches and watercourses which have since been filled in. Even the centuries-old 'ridge and furrow' land was a form of flood prevention.

However, modern techniques can be thrown at this to get the best of both worlds. Controlled drainage is fairly easy to achieve by creating a series of buffers to slow the passage of water.

The starting point is control of the water table in the soil which can be done mechanically and is already practised in the Netherlands. It is being well researched in the USA, not for reducing flood risk, but as a means of reducing pollution of water courses by nitrates which it has been shown to do by up to 50%, making it a win-win situation.

Other simple measures like grass buffer strips and grassed gulleys in fields can slow the run-off of water into watercourses. Importantly, these buffer strips can also filter out much of the soil particles and sediment that would otherwise flow into the watercourse and be washed downstream. The result? Less soil erosion and hence less need for dredging.

A larger-scale extension of using vegetation to slow and filter water are grassed waterways which can be used to control water run-off and soil erosion. These are already being used very effectively in the UK and their use needs to be extended.

The ultimate use of vegetation to slow water, with added environmental benefits in reducing pollution, is using areas of land as a watershed to filter and purify drainage and run-off water naturally by allowing it to percolate through surrounding grassland into wetland areas, ditches and streams before being stored in a lake or reservoir.

These natural attenuation areas slow the passage of water which not only reduces the flood risk but also allows time for the natural biological action of vegetation to remove pollutants from the water. Using these areas as watersheds to slow and purify water in this way can even result in water being cleaner when it leaves the area than when it arrived - how about that for a good news story!

The key to all this is to drain the land in the first place to allow the soil to act as a big sponge to soak up the water so that where the water goes thereafter can be controlled.

'Drain before the Rain'. Otherwise, as the weather forecasters predict, you will just get surface run-off which you can't control. The result? Floods!