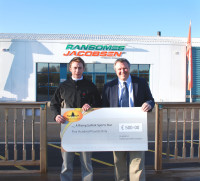 Ransomes Jacobsen, the Ipswich-based turf maintenance equipment manufacturer, has sponsored another up and coming young sportsperson through its support of the Suffolk SportsAid Foundation.

Hugo Dobson, a talented young golfer from Orford on the Suffolk coast, recently received a cheque for £500 from Ransomes Jacobsen's Managing Director at the company's European headquarters in Ipswich. He then accepted a challenge to play the Ransomes Jacobsen 3-hole golf course, where he demonstrated his talent by shooting a ten and equalling the course record.

Hugo won the National Schools under-16 Golf Championship in 2006. This season he came in the top 10 at the Carris, Fairhaven and MacGregor Trophies and was subsequently selected for England under-18 boys. He joins another young golfer, 14-year old Heidi Baek, who is the current National under-15 Girls' champion, as a beneficiary of Ransomes Jacobsen's support.

David Withers commented, "In our role as Gold Supporters of The Suffolk SportsAid Foundation we are delighted that yet another aspiring young person from the region has benefited from our sponsorship. We sincerely hope that Hugo will continue his remarkable progress and eventually compete at the highest level."

The Suffolk SportsAid Foundation has just celebrated its first anniversary and has the sole purpose of raising resources to support Suffolk's up and coming sportsmen and women to enable them to train and compete at the highest level. The Foundation has quickly become established as an important source of funding and has already managed to support 25 of Suffolk's brightest prospects.