0 More than a stroll in New York’s Central Park! 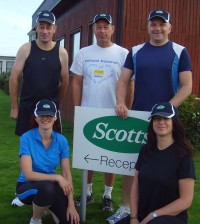 More than a stroll in New York's central park!

An energetic five-strong team from Scotts Professional - calling itself the Scotts Strollers 2 - is in training to run the ING New York City Marathon.

In the process the five colleagues, from the turf and ornamental horticulture divisions, are hoping to raise £10,000 for Whizz-kidz, the national charity giving disabled children the chance to lead a more independent life.

"This 26.2 mile marathon is not to be missed," says Sam Cassidy, from the marketing department. "Apparently the city positively buzzes and the classic course takes runners through five New York Boroughs and includes sensational views of the Empire State and Chrysler Buildings." The spectacular bridges and hills in Central Park mark this out as being a tough marathon.

Sam Cassidy, UK business development manager Shaun Cavanagh and regional director Steve Squires already have a London Marathon under their belts. This time, flying across the pond to conquer New York, they are joined by fertilizer technical manager Andrew Wilson and Frances Lark from customer services.

'I am 7 years old and have a twin brother and a big sister and a mummy and a daddy. I also have a cat called Richard who I love.'

David and his twin brother were born prematurely and were in the special care baby unit for the first few weeks of their lives. While he was 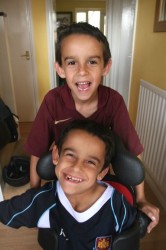 there David contracted an infection which caused damage to his brain. 'It wasn't anyone's fault,' says David's mum, Caron 'it was just a tragic accident, but it left David unable to sit unsupported, stand or walk.'

David also has trouble controlling his arms and legs and relies totally on others to move him as he is unable to operate the heavy manual wheelchair he has been given by the NHS. This means life is very frustrating for this determined little boy as he desperately wants to be able to join in with his brother and sister when they play or go out. 'The children are all very close and love spending time with each other. It's so frustrating for them all that David can't join in' Caron says.

David's family heard about Whizz-Kidz from their local NHS Wheelchair service. 'We knew a powered wheelchair would give David a whole new life. It would give him independence and freedom, let him join in with the family and his friends - allow him to be like any other little boy. I'm so glad we found Whizz-Kidz, it is the most amazing organisation and will utterly transform all our lives'.

David is also really excited about the prospect of getting a powered wheelchair 'I can't wait to be able to run around in the park with my brother and sister and not have anyone push me around. I can't wait to go anywhere I want!'

David's chair will cost £7,500. He and so many other children need your support to explore the world around them, rather than watching from the sidelines as their childhood passes them by. Please help us give them back their childhood today.

To sponsor the Scotts Strollers 2 in their tremendous effort on November 2 simply visit http://www.justgiving.com/scottsstrollers2