by Jonathan Mitchell
in Football
on 29 Apr 2016 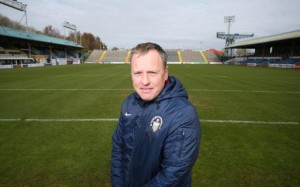 Following Saturday's 0-0 draw in Greenock, Stubbs said that his players had been affected by what he felt was a lively and bobbly park.

But a relaxed Farrell last night admitted he was unfussed by the comments and stated that his only concern is whether the pitch pleases his own club's manager and players.

Speaking exclusively to the Tele, he said: "I saw what he said. He wasn't happy with the pitch. Was I angry? No, I just laughed at it because I thought it was quite funny.

"Listen, at the end of the day, Alan Stubbs doesn't work for Morton. It's Jim Duffy who's the manager of Morton Football Club and Jim Duffy's happy with the pitch.

"The pitch is always a firm pitch, hence why even after 50mm of rain in winter we always get games on. That's because it's always very firm.

"It's only been because we've had a dry spell for the last two weeks that it has livened up a bit more. But it's not my problem or Morton's problem if they [Hibs] can't adapt to a firm pitch.

"It was the same for both teams, the pitch, and no one from Morton was worried about it, were they?"

Monday night's Under-20s match between Celtic and Hibs took the number of games played at the Sinclair Street venue this term to 56, on top of training sessions staged by the likes of Scotland.

Yet, despite the winter months seeing record rainfall, Farrell has not lost a single first-team game on account of the pitch being deemed unplayable.

And the 39-year-old says he is satisfied with the condition of his playing surface - recently awarded platinum status and named in the top four in the country - at the end of a long, testing season.

He added: "I pride myself on ball roll, a smooth and flat pitch. I mean, the stand side does get a bit stressed out because of the amount of games on the park and the limited sunlight.

"That stand side, where the dugout is, is under pressure, so there is going to be balls bobbling around there in the last game of the season.

"You also get more scarring on the flanks because the ball's along the wings a lot of the time and there's a lot of tackles there. But the rest of the pitch is generally alright.

"If you look at all the pitches in Scotland they've been under pressure because of the weather, and we've had 56 matches and near enough 20 training sessions on ours.

"So the way I see it is, we haven't had a game off apart from the one with the flooded main road, and with the wettest winter on record, I've got to say I'd take it the way it is.

"I'd love it to look like the first game of the season, which I tried to, but pitches become tired due to wear because you are playing at a time of the year when it's not conducive to growing grass.

"I have had it better at this point in the season and I've had it worse, but that was the last home game of the season and the pitch has done what's required. It's fulfilled its duty."

For the original article, visit www.greenocktelegraph.co.uk.