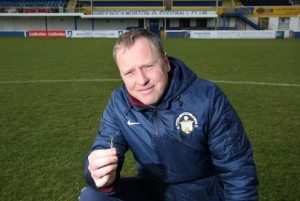 The lush turf has been named as one of the top four pitches in Scotland under the Scottish Professional Football League licensing scheme.

East Fife were ranked first with an average score of 4.7 out of five for each game.

And Morton were awarded 4.6, along with Hearts and Queen's Park.

All four clubs were given 'platinum' status under the gradings, which are decided by match referees.

Mark, 39, hails from Manchester and has been at Cappielow for 12 years, after working at Loch Lomond Golf Club for the previous four.

He is the Ton's only full-time groundsman, but is assisted during the season by a range of volunteers.

Mark says he is passionate about the park, and personally trims the 100 x 68 metre surface using a petrol-driven mower at least a couple of times a week, depending on how much rain has fallen.

Each cut covers a total of around five miles, walking up and down the pitch lengthwise 88 times.

He keeps a meticulous record of every time he cuts, drains and feeds the grass, which, apart from Morton matches, has also been used many times this season for training by Scotland, Scotland's female team, Morton, Celtic reserves and also for community games.

He said: "I'm pleased that everyone appreciates the pitch. Some of the players who come here have taken part in games around the world, so it's a great advert for the club when they say they enjoy the playing surface."

His weekly work schedule varies from 40 to 60 hours, and he has even been known to be tending to the grass under the floodlights at 2am to take advantage of suitable weather.

Mark told the Tele: "I love my work and I look forward to it every day.

"Cappielow is a soil-based traditional pitch. We've just had the wettest winter on record, so that makes it more of a challenge to keep it in good shape."

He concentrates most attention on the main stand side, because it shades the grass, and on the goal areas.

Mark revealed: "There's a slight slope on the park, but that helps drainage."

Mark holds national diplomas in turf science management and turf irrigation, and regularly visits other football clubs and racecourses as part of his determination to continually improve his knowledge and skills.

He admitted, however, that he's not so keen on cutting the grass at home, where he lives with his wife, Tracey, and children Scarlett, five, and four-year-old Olivia.

The proud dad laughed: "Cappielow is my focus for looking after grass.

"It's a workmanlike pitch. You have to put in the effort in to keep it in good shape. It's nice to get awards, but my aim is to keep the surface as good as possible.

"Grass is a plant, and has to be cared for like any other other plant."

The latest award is his fourth, and maintains Cappielow's renowned reputation as one of the best playing surfaces in Scotland.

Mark said: "Cappielow is for the fans, players and directors.

"They know it's only very rarely that a game will be called off because of the condition of the pitch.

"We're all one big family."

For the original article, visit www.greenocktelegraph.co.uk.