Since the 1980s we have seen the reduction and removal of previously effective fungicides and herbicides. This is likely to continue due to directives from the EU to remove such materials and direct us to more environmentally proven practical programmes.

Benomyl, carbendazim thiabendazole and thiophanate-methyl all belonged to the benzimidazoles. These are toxic to disease. This and many other groups such as iprodione, vinclozin, dicarboximide, chlorothalonil and quintozene will, if not already, be removed.

Sulphate of Iron has been used for well over half a century as a turf grass treatment as a component to the traditional "lawn sand" mixture. Its benefits have been widely recognised and consequently its role in turf culture is now well established.

This article is presented to you in an attempt to describe how Sulphate of Iron may be considered as a useful means to discourage moss, algae, weed invasion, earthworm castings and certain diseases.

Modern approaches have taken lawn sand and formulated a liquid version, based on nutrition, to assist the modern turf manager. Feeding in such a way assists in the sward's development, hence rendering these problematic situations less of a concern.

The effects of Sulphate of Iron on moss, algae and weeds, either alone or in conjunction with Sulphate of Ammonia and a carrier, is very quick, although it is important to recognise that the control may be short lived. However, as lawn sand and the liquid formulation are very cheap to purchase, it is probably the most cost effective pesticide for moss control available. Sulphate of Iron applied at the rate of 10 to 15 litres per hectare is proven to be most effective on both moss and algae in turf.

Whilst some suppression of algae may be achieved by repeated applications, long lasting control will only be achieved by correcting the cultural conditions such as poor drainage, shade, compaction, sward density and soil wellness. All these problems favour moss and algae.

Additional benefits of regular Sulphate of Iron may be gained in the control of broad leaved weeds, especially when used in conjunction with Sulphate of Ammonia.

Earthworms cannot tolerate acidic turf. Therefore, as the liquid formulation is acidic, this will assist in keeping earthworms away from the turf surface, hence castings on the surface are greatly reduced. 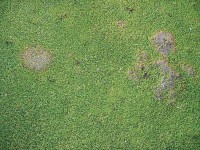 As a consequence, the problem of earthworm casts providing seed beds for weeds, creating muddy conditions and interfering with the play qualities should be reduced. Certainly, in the early winter months and spring, it would appear to inhibit the earthworm castings for a month of so. This will, of course, have a positive effect on the maintenance and turf management.

Sulphate of Iron may have a positive effect against disease, particularly in cool, wet weather.

Fusarium patch disease will cause serious damage to greens and other fine turf areas. The fungal pathogens which cause Fusarium are active under neutral or alkaline soil conditions at the surface of the turf where the fungus is most active.

Therefore, if you affect and acidify the plant tissue and thatch by applying Sulphate of Iron to it, this will help to reduce or possibly control its ingress. Whilst it is accepted that this is not as effective as fungicide sprays, regular use of Sulphate of Iron will help minimise incidences and severity of Fusarium patch, thus reducing the need for fungicide applications.

Due to more and more sports facilities being constructed predominantly with sand, there is an increased likelihood of attack by Take-all-patch disease. This also favours an alkaline turf surface. Again, applying Sulphate of Iron and acidifying the turf surface may limit the spread of this disease. 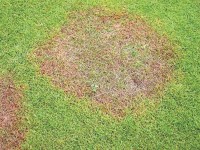 Sulphate of Iron has been recognised and widely known for its darkening effect on turf colour, thus producing a more attractive sward. This affect is mainly due to the darkening of the crown of the grasses, hence its action tends to make the thin sward less noticeable to the sports person.

There are several liquid formulation of iron contained within sulphur and amine nitrogen which are designed specifically to have a cosmetic effect on the turf. Such products produce rapid colour improvement while reducing moss, algae, weeds, fungi and earthworm castings.

There is always a consequence of utilising Sulphate of Iron as it will induce black layer within the profile and, if the application rate is not adhered to, the consequences may well be devastating as experienced by Greenkeeper and Groundsmen alike. Regular application may also prove detrimental, therefore, great care needs to be taken.

These views are that of David H. Bates Agronomy Service only, but may be worth your consideration. David may be contacted on 07736 066031 or email at DHBatesservices@aol.com