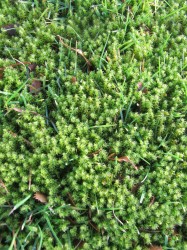 With the inclement, milder, wet weather recently experienced in most parts of the country, we are seeing a significant rise in algae and moss problems on turf and on artificial sports surfaces

There are over 12,000 species of moss and algae, of which over fifty are found to affect turf surfaces. Mosses are primitive, non-flowering plants that have no root structure and rely on sufficient moisture being present in the environment for reproduction and survival. The majority of them are tolerant of acidic conditions and are stimulated by cool, wet, humid conditions when they can easily compete with vascular species that favour warmer conditions.

Rapid colonisation of moss and algae usually occurs during the autumn and winter months when soil and artificial sports surfaces are lying wet and saturated for long periods of time, and particularly when little or no regular maintenance has been undertaken.

The recent loss of chlorothalonil as an approved ingredient may have compounded the problem, as it helped inhibit the growth of difficult to control moss species such as Silver-thread Moss (Bryum argenteum).

There are three main types of mosses found in turf: 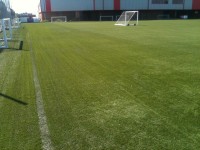 Mosses grow slowly and are tolerant of shade and close mowing. They are able to populate turf situations when turf grasses are under stress and bare soil areas are available for the moss to invade. Moss can spread either by spores or by detached fragments of the parent plant material.

However, mosses are less tolerant of wear. Mosses are not the cause of turf decline but a symptom of environmental conditions or poor maintenance regimes. Mosses are also a common sight on infertile acidic sandy soils that are allowed to dry out. Mosses may invade when any of the following conditions are prevalent. 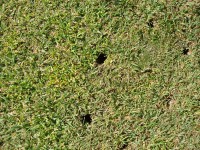 Grasses grow poorly in dense shade because of low light and increased disease activity; therefore, shady grass areas usually have more moss than grass areas in full sun. Thinning out trees by selective pruning, or removing them completely, may reduce moss encroachment. In some cases, it is easier to redesign the area and eliminate turf than it is to improve lighting.

Often, drainage can be improved by the installation of primary or secondary drainage systems to help remove surface water.

Algae can cause a glutinous slime (squidge) which is associated with fine turf situations. The form of algae commonly found in turf is a cyanobacteria, a phylum of bacteria that obtain energy through photosynthesis. It is more prolific during the spring when the ground conditions are moist and wet, and air temperatures and light levels begin to increase, thus stimulating the growth of these algae.

The symptoms show as dark green or black slimy growth that covers the plant and soil surface, resulting in a very slippery surface, which can be dangerous and affect surface playability. Conditions that increase the likelihood of an attack of algae are the same as moss, but are encouraged when surfaces remain waterlogged and smeared.

Both natural and synthetic surfaces can be affected by moss and algae attack when the favoured conditions are prevalent. Playing characteristics are affected in that moss and algae can affect ball bounce/roll on fine turf situations. The slime that algae produce causes the biggest problem on sport surfaces, making them dangerous, particularly if algae has formed on sloping grass areas, such as golf fairways. Moss and algae also cause surface traction problems for players on artificial surfaces, which may result in injuries.

Control of Moss and Algae

The main reasons for moss and algae attack are poor maintenance and lack of effective cultural practices, coupled with environmental factors that stimulate moss and algae growth (wet, damp, or humid conditions).

Any cultural practices that encourages turf growth and development should be employed to control moss. Evaluate the site and make necessary plans to implement maintenance regimes to improve the soil environment, reducing excessive moisture and water from the turf surfaces. 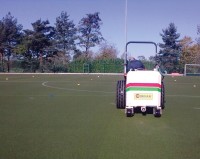 Artificial Turf surfaces
- Keep surface clean
- Regular brushing and sweeping
- Chemical control using approved hard surface moss and algae killers at approved rates of application; it is important to seek manufacturer's recommendations on what product to use on synthetic surfaces to prevent damage or discolouring

The best form of eradication is to ensure a healthy grass sward is maintained, which is usually achieved by good, regular maintenance regimes, particularly aeration to keep the soil in good condition. If, however, you are saddled with a turf situation that has a lot of moss present, there will be a requirement to kill the moss off with an approved chemical containing an active ingredient of Sulphate of Iron and, when it has died off, remove the dead matter by scarification/raking.

The best results are obtained by the optimum timing of operations, best suited to spring and autumn periods when grass growth is vigorous.

However, soil analysis of turf facilities that have used these chemicals to control moss over long periods of time has found that chemical changes have occurred in the soil profile and have created other problems, iron pans have been formed by over-use of sulphate of iron, and pH levels can be influenced.

The best form of control is good cultural practices to tackle environments that mosses and algae prefer.

A range of moss control products can be viewed in the Pitchcare Store.