I hope that you are wondering if this 'Anhydrous Syndrome' actually exists. That being the case I have successfully grabbed your attention. 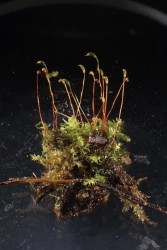 When Laurence rang me up and suggested I contribute a small article on moss control I was to agree with a measure of reluctance. To try and fashion, yet again, another article on this very ubiquitous and repetitive subject has measures of difficulty.

A rolling stone gathers no moss; but can we say that about an impoverished green though? So, fellow practitioners, here is our starting point. Tom Cruise turned this mission down; fundamentally it has required more thought than action.

Morphological, physiological, and biological aspects are all pertinent and could be considered a rightful starting point to any moss disorder. However, as most cited articles are directed towards cultural control then that is where I will start and finish, but my direction will lean to a slightly different angle to hopefully establish a slightly better control. You decide?

Moss; what is it?

Moss is a tiny, leafy-stemmed, flowerless plant of the class Musci, reproducing by spores and also asexually from displacement from fragments which are carried over fine turf, soil, rocks, and tree trunks. All having one fundamental constant, water. This free water, which remains the catalyst for its establishment, becomes the link to its dissipation but let us be fully clear on this.

So, where do we go from here? Well, this is where the Anhydrous Syndrome has served me and could be considered of cultural benefit. Let us make an assumption that we have looked at, and corrected, all the obligatory checklists of cultural methods. We've done the shade bit through to nutrition yet we still repeatedly encounter the annual response of moss that visits our surfaces, so what eludes us? Why are repeat prescriptions always necessary? The elusive answers to this can only be considered to be locked in the vaults of Mother Nature.

My trials have concluded that, if we remove the surface film of water from direct contact with the reproduction facility (the spores), then we can gain the upper hand to its control and eradication, but how? Well, I have secured much success in this operation by using hydroscopic agents that physically absorb the free water from the spores to a state of dehydration. In this disadvantaged state the spores readily die off cutting off the very source that enables the moss to spread throughout the sward.

In this much weakened physiological state the plant is readily reduced by the beneficial micro organisms, allowing the grass to grow through creating, once again, an entire botanical composition of grass.

If you recall a recent message board post on moss it was suggested that Epsom salts have the ability to play a significant part in the desiccation. This underused agent, when spread in granular form, has a profound effect on the absorption of the surface free water. Highly hydroscopic, it readily mops the film from the sphere shrouding the plants spores. Although the moss plant can survive 80% dehydration, the spores detect a difference and are readily killed off when the free water is withdrawn, soon to succumb and perish to this transitional state of moisture loss.

With the reproduction catalyst removed the plant loses its ability to further spread, leaving it in a weak and vulnerable state of health. Hydroscopic agents have the ability to achieve this and I have trialled many with much success. This should, however, not be considered an alternative to profile drainage and, as such, a good drainage system is mandatory in all aspects of grass health.

Other mandatory work would include, adequate and timely aeration practices, including a soil flocculation prescription (flocculation for another day!), a regulated nutritional programme, air flow and shade management, cutting frequencies and heights, all of which serve to hinder but not necessarily eradicate this unwanted visitor.

Now, if you do decide to try out the Anhydrous Syndrome then you must choose a period of dry weather where no precipitation is expected for at least forty eight hours. Surfaces must be brushed and all free water displaced well away from the spores. This, in turn, will facilitate a quicker dehydration of the reproduction mode of the moss.

Let's summarise. My synopsis is directed through my own experiments. They are my trials, my applications, and my positive results, yes they are positive, and, yes, they work. However, let's be clear on a possible disadvantage, and this will depend greatly on the type of hydroscopic agent you use, and depending on product an imbalance can occur.

If we determine to use salts, for instance, a variation on conductivity and chemical variations are possible. If we use calcium carbonates PH and other values could be compromised? Allow me, once again, to be perfectly clear on this - the variations would only be attributed to excess and not on single applications. All in all, a prerequisite of good moss control can only be attributed to an active and rolling management regime where the turf practitioner is seen to be active in the dynamics of its regression and desiccation.

A rolling stone gathers no moss, but a delay in structured application certainly does.

For those readers who suffer moss problems, I very much hope that my advice will be of use. Goodbye moss, hello green sunshine.

Yours in agronomy,
Ian Macmillan MG.