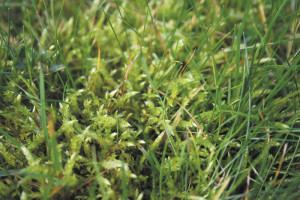 Having sat in on the sales desk in the early part of the week, it became quite obvious that moss, at the present time, is one of the major problems in our industry after a mild and wet winter.

Coincidentally, it comes at the same time as the discovery of the world's oldest known plant specimen. That's right, you guessed it, a moss! Found under the Antarctic ice, the specimen was found and re-grown in an incubator after laying dormant for 1,500 years. Mosses have become such a 'burden' to many gardeners in recent times that some landscapers have begun to design gardens using moss. Used instead of grass, the product is cited as an excellent replacement for turf in areas of terminal shade and moisture.

So, why has moss become such a problem this year?
Moss, like every living organism, loves moisture. The difference between a moss and other plants is that they do not require a root system for survival. Whilst many take nutrients from the substrate directly beneath them, a lot of mosses can also survive in areas where moisture, and nutrients, pass over the leaf. They are also an organism that, in comparison to grass species, loves shade and poor drainage. These are special qualities that help us understand why they can be found on most surfaces, even hard surfaces such as roofs and pathways. The high levels of moisture, mild temperatures and a competitive growth habit over the winter period have therefore been a major contributing factor to the amount of moss we have witnessed in the early spring.

As the Bryidae sub-class is so broad, it is normally broken down into the acrocarpous or pleurocarpous sub-groups. The easiest way of distinguishing between these two is that acrocarps are normally tufted mosses, whereas pleurocarps are sprawling. The defining features of acrocarpous mosses are that they are unbranched with an erect growth habit. Pleurocarps form mats of growth through freely branched, often fern-like, branches.

How do we control moss growth in a turf environment?
The traditional method of moss control typically utilised the use of lawn sand and other cultural practices. Whilst there are many instances where these processes could still be advised, there has been a slight improvement in the technical ability to beat the problem at the present time, at least for pleurocarpous mosses.

In a professional setting, many advisers would recommend treating the area with soluble iron sulphate, which would cause the moss to die off, allowing easier physical removal of the organism. This would have the added benefit of 'greening up' the sward without causing excess growth within the sward. 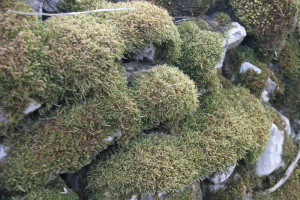 The growth habit of an acrocarpous moss is a contributing factor to why they are more difficult to control in general than their pleurocarpous counterparts. Essentially with a tufted, more vertical growth habit, scarification / verticutting often does not have the desired effect. Many golf and bowls greenkeepers will be familiar with the invasion of a moss known as 'silver moss' (Bryum argenteum). This sub-species is of particular nuisance due to its rapid colonisation of weak areas and an ability to withstand some chemical control.

As moss is an advantageous species, the important thing is to try and ensure a competitive growth habit by the individual grass plants. Ground coverage, especially heading into the winter, is therefore essential.

What else can be done to reduce the risk of moss invasion / establishment?
Ensure adequate irrigation without over-watering. Many sports complexes around the country utilise an automatic irrigation system. In periods of stress, it would be advisable to water thoroughly, but to requirement. Over-watering can lead to other unwanted problems.

Find a balance in mowing height. Particularly in golf and bowls, mowing height plays a significant part in how the ball reacts with the surface. Ensuring you can find a balanced mowing height to allow good coverage without affecting playing quality is important in all sports in terms of moss reduction.

Reduce thatch. The utilisation of controlled frequency verticutting and deep scarification during periods of good recovery will reduce the organic content within the thatch layer. Reducing this moisture holding ability within the O horizon of the soil is very important in moss control.

Aeration, aeration, aeration. As with anything in a sports surface, ensuring the best aeration will help provide a competitive grass sward. As mosses prefer compacted, moist soils, reducing the compaction and increasing drainage ability is a great tool in reducing the efficacy of moss invasion.

Removal of surrounding causes of shade. In areas that are prone to moss, look around the area and whether anything can be done to reduce the shade/increase direct light levels (e.g. removal of tree limbs etc). As mentioned previously, moss is highly competitive in shade over grass.

Overseeding. Overseeding in the autumn is recommended due to a more reliable amount of moisture and mild temperatures promoting early germination and establishment. Ensuring good establishment could be key in increasing coverage as you head into winter, particularly in known bare areas.