2 Mother Nature on the rampage!

"At regular intervals, the nematodes literally burst out of the root where they breed frenetically. The offspring then burrow their way back in to any available roots, where the whole cycle starts again" 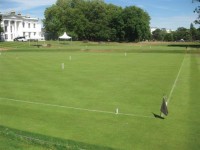 The variety of challenges offered to the incumbent Grounds Manager at Hurlingham are many and varied. It really is a fascinating post and one that I enjoy immensely.

From time-to-time, fresh challenges crop up that have not been seen before and, currently, there are two such challenges that have led to more than a little head scratching.

Managing the fine turf surfaces here means an ongoing sequence of feeding, cutting, watering, rolling and the recognition and treatment of various pests and diseases. We have dealt with diseases such as fusarium and ophiobolus patch, and pests such as leatherjackets, frit fly, St Marks fly and the good old earthworm. However, the latest problem, in the form of nematodes, has been our greatest challenge yet.

Nematodes are slender, worm-like animals, typically less than 2.5 millimetres (0.10 in) long. The smallest nematodes, such as we are dealing with at Hurlingham, are microscopic and, therefore, the only way to ascertain their presence is by sending soil samples away for labarotary analysis.

The type of nematode that has caused major problems on our croquet and bowls surfaces is called a root-gall nematode. It lives in the the roots of the grass, feeding off the soft tissue inside the root. At regular intervals, the nematodes literally burst out of the root where they breed frenetically. The offspring then burrow their way back in to any available roots, where the whole cycle starts again. 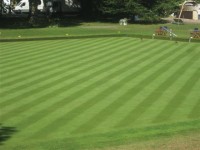 Dealing with this type of pest presents two uniquely significant problems. The first is that, as the nematode lives most of the time inside the plant root, it is protected from outside threats such as chemicals. Secondly, as this problem is relatively new, there has been little research done on combatting it, and there are no treatments available at present that can guarantee success.

With the help of our consultant agronomist, David Whittaker, who was Course Manager at Wisley Golf Club for many years, we have put together a programme of treatment which we are very hopeful will control the problem.

Whilst the nematodes, by themselves, will not kill the grass plant, they do weaken it considerably. This combination of stress, caused by the pest, very low cutting heights and summer dryness will, inevtitably, lead to the eventual death of the grass.

Our two-pronged attack was to firstly, through cultural methods such as nutrition and aeration, ensure that the grass plant was as healthy as possible. Secondly, we have been applying a garlic based nematicide, which research has shown to be effective in controlling the root gall nematode. Timing of these applications is crucial, as it is only effective when the nematodes are outside the root and breeding, so three treatments are made on consecutive weeks. 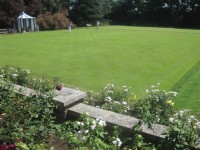 We have also bought a mustard based nematicide which has been used at The Emirates stadium with good results.

Bowls green one has been the worst affected of the surfaces, but we think we are seeing a genuine and sustained improvement in all the lawns. We are very hopeful that our current plan of action, which is being implemented with enthusiam and expertise by the team, lead by new supervisor Tom Clarke, will eventually see the lawns return to their previous high standards.

The other major problem that we have been tackling this summer is that of blanket weed in the lake.

This has been an ongoing problem for many years but, this year, due to the high summer temperatures, the problem is far worse.

Firstly, I think it is important to stress that neither the recent dredging of the lake or the installation of the new fountain are linked to this problem.

Blanket weed is an algae, and is very successful at colonising and dominating an environment under favourable conditions. It spreads and recolonises vegetatively, by branching off and breaking off parts of its own structure which will then colonise new areas.

A combination of warm water temperatures, high nutrient levels and lots of sunlight are needed for algae growth but, once those conditions are right, growth can be remarkably quick, as has been seen this year.

We have tried many different methods to combat this problem, including ultrasound devices and numerous chemical concoctions, all harmless to fish and wildlife but, unfortunately, also harmless to pond weed!

Barley straw has been used to combat this problem for centuries, but it is only recently science has found out how.

When the straw rots down, it produces a dilute form of hydrogen peroxide which kills the weed

Placing barley straw bales in the lake is something I have always tried to avoid, as it doesn't look nice, but we are now trying a liquid barley straw extract, and it seems to be working.

Another way of reducing pond weed is to starve it of sunlight and, to this end, we will soon be planting sixty pond lilies in the lake, which will not only aid our battle against the weed but also look attractive.

Working with nature is part and parcel of my job, and it is the most enjoyable aspect of my work. Occasionally, nature bites back and the nematodes and pond weed issues are good examples of this.