by External source
in Football, Renovations & New Builds, and Industry News
on 03 Jun 2016 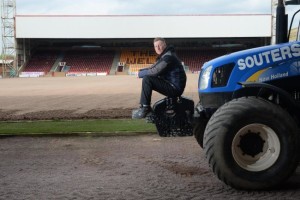 It's first thing on Monday morning and Paul Matthew is already hard at work. In fairness, he has been ever since he first walked through the front door at Fir Park little over a year ago. Standing in the shadow of the stadium's giant South Stand, Matthew consults with a colleague about the day's work as several pieces of heavy machinery snarl, grunt and crank into action.

A short walk later and the Motherwell groundsman dashes around the vast expanse of bare ground in front of us before we walk down the stadium's tunnel and into the comfort of a function suite before eventually settling at a table, talking all the while about the journey he and the Premiership club have travelled together during a radical 12 months.

For years, the infamous pitch at Fir Park was synonymous with postponements, embarrassment and, more importantly, financial loss to a club living modestly following a spell in administration in 2002.

It is, therefore, to Matthew's credit that he has, quite literally, helped Motherwell outgrow this reputation by harvesting one of the best playing surfaces in the country. Given his views on the lack of respect shown towards groundsmen by the game in general, he hopes he can plant the metaphorical seed for Scottish football to follow suit.

"The Motherwell job came up and I knew the hereditary problems involved," he said. "It's a difficult pitch and nobody really understands how difficult. Geographically, it's the second highest pitch in the country, something like 86 metres above sea level. We get hit with all the weather patterns, particularly rain. What you want is a football pitch that drains and we didn't have that, so, in the last two renovations, the club have supported me in my bid to get the stigma away from our surface.

"We are trying to make Motherwell the model for the rest of the teams in our league that don't have massive finance. I'm not a money man. I'm just a guy that sees what we do as a club and I look at my counterparts and wonder why they can't."

You can read the full article from the Herald Scotland HERE