As the threat of a total ban governing the use of pesticides hangs over the industry and the climate continues to provide the ideal wet-and-warm conditions for fungal turf diseases to thrive, many turf professionals are striving to find alternative methods of control.

Stuart Stenhouse, Estate and Golf Course Manager at Mottram Hall, one of ten De Vere hotels to carry the "De-Luxe" rating, has been involved in this quest for the last ten years, since he was Course Manager at Gleneagles. "The Jack Nicklaus course at Gleneagles has USGA greens and we had a problem getting a linear growth pattern," he recalls. "We'd cut the greens in the morning and in the afternoon we'd have to cut them again. We wanted to avoid a peak and trough growth period. I'd used granular fertilisers in the past but after using a Floratine soil amendment programme to re-balance the soil I switched to 95% foliar feed and I've been using this approach ever since."

A year later, after visiting the company's headquarters at Collierville, Tennessee, Stuart was invited to perform initial trials of Floradox Pro, a strengthener that enhances the plant's natural immune system and is part of Floratine's defensive nutrition strategy. "I tested it on four diseases at Gleneagles, Fussarium, Take-All Patch, Red Thread and Leaf Spot and it had an effect on each one," he recalls. "Each disease became less severe within seven days."

After leaving Gleneagles Stuart went to Ireland for three years and took a trip to South Africa before returning to the U.K. and accepting his current position at Mottram Hall. Situated on the south side of Manchester, close to the airport, the hotel and country club frequently plays host to visiting Premiership football teams who practise on the F.A. accredited pitch before an important fixture with Man. United or Man. City. The grass tennis courts have seen the likes of Wilander and Henri Le Conte play in the Pro Tennis Tournament and the 18-hole golf course is regarded as one of the most prestigious in Cheshire if not the North West.

As with most, if not all highly regarded sporting facilities a tremendous amount of effort lies behind the pristine appearance.

"We have massive soil problems here with our greens," Stuart continues. "They are excessively high in Iron and Sulphur which has affected percolation rates, has had an adverse effect on other nutrients, tying them up and created a severe black layer issue. I have our green's rootzone analysed yearly. Floratine send samples for analysis to Analync in the USA and the report I receive is one of the most comprehensive soil reports I've seen."

Stuart uses the penetrant Pervade and Calphlex to flush the excess Iron and Sulphur from the soil, along with Maxiplex, which contains humic acid to build exchange sites for nutrients, helping them become more available. Trical 35-SP, a highly available source of soluble Calcium is used, because although an excess of this mineral is already present, it's tied up. "Trical also helps neutralise the effects of Black Layer and adds Oxygen to the soil," Stuart explains. In order to add nutrients he uses Defence -Man and Defence-Mag - immediately available Manganese and Magnesium - and a new Floratine soil amendment Quad K, for Potassium. 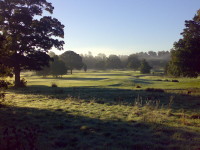 Stuart has a basic list of 16 foliar products, which he uses in different combinations according to the time of year and the weather conditions. Carbon N a balance of nitrogen and carbon for example is used in spring and summer and then replaced by Carbon K, a low salt, non burning source of potassium for autumn and winter. "I've found that using low rates of Per 4 max, (which increases density) in winter means that the sward goes into spring stronger," he explains. "In summer I'll change to Astron, which encourages root development and stress tolerance to protect the roots through the summer period. This course supports about 40,000 rounds of golf a year and I need to do something to offset the effect this has on the sward."

Ever since his trials at Gleneagles Stuart has used Floradox Pro to combat the threat of disease. "I'll probably use it even more now, following the E.U. legislation," he says. "It acts as a disease suppression, not a fungicide. It doesn't kill anything but triggers the plant's natural immune system and gives it oxygen to aid recovery. I use it mainly through the spring and autumn and have seen a great reduction in disease severity. Combined with other Floratine products it's strengthened the plant and helped it through high stress periods."

The high temperatures and damp conditions in August 2006 triggered an outbreak of anthracnose. "This year was O.K.," he continues. "We used a couple of other products alongside Floradox Pro and the combination worked. The Anthracnose was still there but it didn't manifest itself."

Having kept disease at bay during the summer, autumn brought a renewed threat. "We have quite a bad thatch problem and we hollow tined the 2nd week in October," Stuart recalls. "As soon as the air gets in the bacteria start to break down the thatch, which results in nitrogen release. Once you get a bit of growth the fussarium kicks in. I use a combination of foliar feed products before adding fungicide and this usually stops it in its tracks. Basically if I can get away with one fungicide application a year I'm happy."

Let us hope that the powers that be in Brussels continue to let him do so.