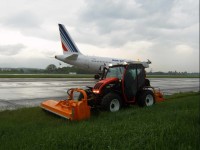 Markus Sheupbach Sales Manager for Agromont said, "based on it's powerful base unit and high towing force, Zurich & Genf wanted the strong and versatile Mounty 100V tool carrier for three specific tasks; Aircraft towing, cleaning rubber abrasion deposited by aircraft and, with a plough attached, removal of snow from runways and other sensitive areas. The Mounty's will also be used for a range of additional tasks including vital in-field area grass cutting and maintenance"

Simon Richard, agent for the Reform range in the UK added, "the hydrostatic drive, low centre of gravity, four wheel steering manouvrability and wide footprint make the Mounty 100V the ultimate workhorse for a wide range of Airport maintenance tasks. Strong linkages make it the perfect power base for a range of heavier attachments including a front-loader.

The five that have been sold to the two Swiss airports will be primarily at work on level terrain but the Mounty really comes into its own where severely sloping ground of up to 45 degrees is involved. The unique crab steering facility gives enhanced stability in extreme situations and the model also offers weight compensation and vibration damping to protect both operator and machine. The Mounty 100 V is also optionally available with exhaust emission stage 3B, to further reduce pollution and environmental impact"