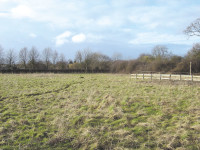 Charlie Haynes, Chairman of Old Marston Parish Council summarised the Council's position by describing the outline of the project. He said "As the name of the village would suggest, the sports and recreation ground is built on boggy marsh land. In the 1960s a drainage system was installed and yet, in recent years, we have seen a gradual deterioration in the playing surfaces in the winter months.

The result is that the local Marston Saints Football Club, who lease the land from the Parish Council, have been unable to use the pitches for around two to three months each season and have reluctantly had to hire alternative pitches in the area - simply because the land was waterlogged. We needed to identify the problem and assess the cost of the remedial work required." 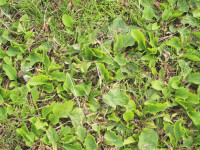 Under the guidance of TTS Technical Directors, Alan Lewis and David Bates, the feasibility study soon revealed that, on the Marston PCC land, the soil surface was compacted, with a penetrometer reading of over 600psi, and identified by the presence of a fine crop of plantians (Plantago major) - which is an indicator plant of soil compaction. In addition, the profile not only showed a compacted surface but a destructured top soil to a depth of 25-40mm.

Further investigation of the pitch conditions was supported by discussions with the parish clerk who knew the history of the land for many years. It was found that an existing herringbone drainage system had been installed in the early 1960s and it was quickly confirm that this was blocked by the root growth of trees planted around the ground during the 1970s. 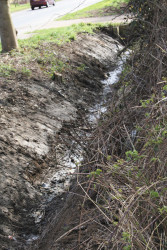 Assessments were also made for Marston Saints FC for the works on the adjacent land, which was overgrown and had poor surface levels. A topographical survey was completed to plan the design of the final pitch layout, including a drainage design, earth works reports, outfalls and final design levels.

From the investigation survey and soil samples, the client could then be informed on why, and how, the land needed to be levelled and drained in preparation for the construction of the proposed five training pitches. The whole area required a topsoil strip and sub-soil levelling to get the area to a standard 1:200 gradient along the length of the pitch and 1:100 across the pitch. The drainage outfall of this site was easier to find than on the existing pitches on the adjacent site, where the land was over a metre higher with ditches around one side.

Both the above feasibility studies were submitted, one to Marston Parish Council, in support of a funding applications to the Football Foundation and the other for Marston Saints Football Club for applications to the Oxfordshire County Council and Waste Recycling Environmental Limited (WREN). In response, the two funding bodies The Football Foundation and WREN, required detailed specifications of the whole project to be drawn up in preparation for invitations from contractors to tender for the work and establish market prices.

TTS produced the tender documents and the drainage designs and put the two projects out to tender using their national contractor database. Having completed a structured review of the tenders returned, funds were granted by all the funding partners. In agreement with representatives of all the clients involved White Horse Contractors were selected to undertake the work and a start date of early spring 2007 was agreed.

Summer 2007, was one to remember (could we forget the rain and flooding?) and, unsurprisingly, the project was hampered by wet weather and site conditions throughout. In fact, Oxfordshire had 300mm of rain from May through July and, to compound matters, until the existing pitch had been drained any remedial work on the Marston PC site was delayed.

Alan Lewis explained "Despite the weather, we did make progress. Some of the trees were removed for safety reasons and we had the ditches cleared to help lower the water table and act as a catchment drain between the areas of land. We installed a new piped drainage system with five metre laterals. Site investigations showed a high water table so we wanted to get the drains as deep as possible, but this was limited due to the outfall depth. However, we did manage to maximise the fall of the drains by redesigning a bespoke outfall drain.

Charlie Haynes said "Initially, some members of the committee were apprehensive about undertaking this project. However, the feasibility studies and discussions gave us the understanding and confidence to proceed. The project was difficult with the weather but we are delighted with the outcome." 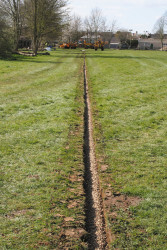 Any possible concerns the council members had over the efficiency of the new system were dispelled almost immediately after installation, when, after heavy rainfall, over a weekend in Oxford when 5" (125mm) of water fell on the pitch. The drainage system worked, with the outfall running at full bore.

To complete the drainage part of the project, the surface was dressed with 150 tonnes of sports sand and aerated using a verti-drain aerator. Due to the heavy compaction of the soil, the tines were unable to penetrate to their full depth, although, with regular maintenance, this will improve each time it is done. The whole area was over sown with perennial rye grass at 35 grammes per metre square, fertilised with a three month slow release fertiliser high in phosphate and potash - the nutrients found deficient from earlier soil tests.

Nevertheless, after the sub soil was laser graded, the top soil was returned and a pipe drainage system was installed. The surface work was completed with 200 tonnes of sports sand, ameliorated into the system to aid the rapid movement of surface water. It was possible to put more sand on the new area because it was bare and could be 'worked' into the surface. After the final levels were trimmed to +/- 15mm the site was sown with 100% Permanent Rye grass seed mix in three directions.

ithin two days of sowing the new ptches, on the 29th of August, Oxford again had more very heavy rain. However, on this occasion, the rain was of real benefit, and fortuitously this facilitated a very good germination rate and a quick establishment period.

The site was bare earth for so long rumours began that it was a construction site but, eventually, the grass germinated. Amusingly, the local residents had actually called the site "The Bowling Green".

Following the establishment period Alan hosted a training day for the grounds team at Marston PC and Marston FC. The course provided guidance on how to look after, and sustain, their new surfaces and guidance on how to use some new machinery, which was provided by the funding bodies. To complete the project the surfaces were tested to Performance Quality Standards and both passed at a 'high to standard' level.

A final word from Alan himself. "This was a very satisfying project and it has shown that funding directed in the correct manner can really benefit the local grass root teams. But, the most pleasing thing about the entire project is that the new grounds will be maintained properly. The client understands the requirements of looking after natural surfaces and have been given the equipment to help them do so."