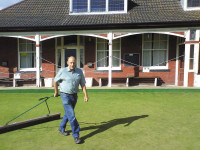 I started my career in greenkeeping back in 1978 serving an apprenticeship with the then Portsmouth City Council Leisure Department during which I gained my City and Guilds in Amenity Horticulture.

I spent ten happy years with P.C.C and, during this time, worked in several different parks across the City, mainly on their bowling greens although I did experience working on cricket wickets, tennis and winter pitches. Latterly, I spent my time working at Southsea Castle Bowling Greens where the three greens were kept to a high standard for the prestigious annual Southsea Open Bowls tournament. This competion attracted participants from all over the UK and even some foreign players.

In 1988 I moved to work for the Portsmouth Water Company to maintain their bowling green, cricket wicket and football pitch, along with grounds maintenance at their head office, pumping stations and reservoir sites.

I spent fifteen years with them but, towards the end, my job changed and I was spending less and less time on the sports facilities and more time working on water quality. This, for a greenkeeper, was very frustrating when you know certain jobs had to be done on the green but, because of management practices, I was not allowed to perform them. Eventually, the greens suffered and it was at this point in time I knew it was time for a change.

During my time as a greenkeeper I always maintained membership of the IOG and sat several of their examinations gaining the NPC and NTC certificates in turfculture. I also attended their level 1 and 2 Bowling Green courses held at Beach House Park in Worthing which involved tuition by the likes of David Bracey and Tony Leach, both interesting and very informative. It was during one of these courses that my lucky break came.

I just happened to sit next to a complete stranger. We got talking and it transpired that he had been sent from a bowls clu 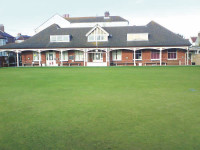 b local to me to gain some experience so that he could liaise with the contractors maintaining their green. He said that they were not happy with the service they were getting and were looking for other companies to tender for the work. When I mentioned that I was thinking of setting up my own company, and looking for contracts to maintain bowling greens, the seed was sown, I had an interview with the committee of the club and gained my first contract. That was in April 2003.

The club had recently purchased a new Dennis FT610 with loads of attachments. The committee members had ideas about doing the work themselves but, once I gained the contract, a deal was sorted out where I purchased the machine from them over a five year period. So I had use of a brand new FT610, which has turned out to be a reliable mower and very good for contract work with its interchangeable cassettes. I also purchased a Groundsman 345 aerator and a Wolf 32b scarifier.

It did not take long for the word to spread about the 'new kid on the block' and I soon acquired three further contracts for the full maintenance of greens. So, within a year, I was looking after the greens at Cowplain, Waterlooville, Bedhampton and Southsea Waverley Bowling Clubs.

With the ages of the clubs ranging from 110 years to just 15 years each green was different in make up and soil structures, the older ones being more soil based than the younger sand based ones. It was no surprise that, during the wet summer we have just experienced, the older, soil based, greens suffered water logging.

So, this autumn we have had to have a specialist contractor on the sites to do some deep tining, to make sure this does not happen again. Even though, in the previous couple of years, we have used the Ecosol deep drill and fill and the Graden deep scarifier to back fill with sand - and they both made a huge improvement - it was just the sheer volume of rainfall this summer that took its toll.

After my first two years of being in business I gained another two contracts looking after Emsworth and Fishbourne Bowls Clubs. So, in a matter of two years, I was now looking after six bowling greens and I felt my initial gamble had paid off. I was established!

At about this time I was introduced to Darren Hatcher of Sherriff Amenity. Well, to be fair, he called in on the off chance where I was working. He offered his recommendation on some products and I have not looked back since. His annual soil sampling on all the greens are sent away for analysis and, from there, my fertiliser programmes are set up for the season. He has the back up of an excellent technical team and anything I am not too sure about, advice can be gained from them. I am very happy with the service I receive. 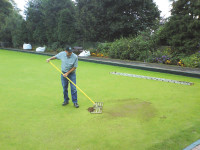 Apart from the normal problems associated with greenkeeping in respect of pests and diseases one encounters, I also have to endure a rather invasive fox who has decided to make its home in the middle of Portsmouth, at Southsea Waverley, which is one of the busiest parts of the City. It is constantly digging holes and rummaging through bins but, luckily, has not been urinating on the green, so no brown patches as yet! And, of course, the bowlers themselves can cause problems, but of a different nature, with each club having its own 'technical advisor' of how things should be done!!

One of the biggest constraints is having to have the maintenance work finished by 10.30am. This can be a problem if you get held up somewhere, as just ten minutes delay can make all the difference. Fortunately though, through agreement, the greens are cut on alternate days so they don't all have to be done at once.

Access to the greens can be awkward as well. Whoever designed them did not take into account deliveries by lorry! Thirty plus tonnes of topdressing delivered in one tonne bags normally arrives on an articulated lorry which sometimes has problems with the narrow roads in and around the City. But, with the aid of the obligatory forklift truck, pallett trucks and, usually, very helpful drivers, we manage to get deliveries close to the gates.

As for the future, things are going well. I have just gained another two contracts for the Arundel and Crablands Greens which are situated in West Sussex and I will have started work on these as this magazine is published.

To help out with this added workload I have taken on an apprentice, Darren, who has just started to attend Sparsholt College in Winchester to gain his NVQ2 in Amenity Horticulture.

The main problem associated with bowls is the age group of the members which, on average, must be over sixty. There is an urgent need to get younger people involved in the sport. If this does not happen then the future survival of some of the clubs must be in doubt.

Also, with our ever unpredictable weather patterns now, and seemingly warmer winters, there has been an interest from a few of the clubs to try keeping the greens open all year round. With a bit of planning and thought I cannot foresee a problem and, who knows, we may even see people playing bowls, outdoors, on turf, on Christmas day. Now there's a thought!!

Finally, I must add that I have thoroughly enjoyed my near thirty years in greenkeeping and have gained some good friends along the way. I would not have changed it for anything. As everyone reading this will know, once greenkeeping is in your blood it is there to stay, and I am looking forward to my next thirty in the profession.