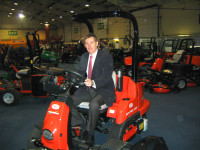 With Exeter's Westpoint Arena being just a stone's throw from the M5, it is the perfect venue for a South West turfcare exhibition.

For the past six years, one of the West Country's largest turf machinery dealers, Medland, Sanders and Twose (or MST as they are more commonly referred to) has been running an annual exhibition during October.

The one day show regularly attracts around 2,000 visitors, and this year was no exception.

The list of exhibitors is drawn from MSTs franchises, which includes Ransomes Jacobsen, Kubota, Massey Ferguson, 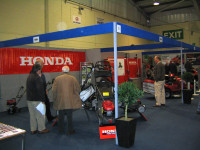 Entrance to the show was free and visitors were drawn not just from the turfcare industry but also farmers, landscapers and gardeners. To that end the show included some massive Massey Ferguson tractors and, at the other end of the scale, garden mowers from Mountfield and Viking.

The Massey boys were offering 'ride and drive' opportunities on their models, whilst Bicton College, 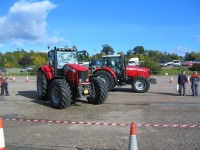 from nearby Budleigh Salterton, were on hand to discuss career opportunities within the land-based sector.

MSTs Paul Watson said: "We did notice less local authority visitors this year. Nevertheless, with visitor registrations from as far afield as Southampton and Hereford, we were delighted with the turnout. So much so, that we have already booked the hall for October 19th next year."