0 Much ado about Wenlock 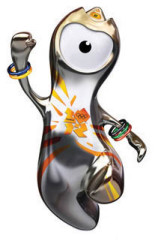 When Wenlock and Mandeville were unveiled as the 2012 Olympic mascots, the little Shropshire town of Much Wenlock was thrust into the limelight. For it was here that the modern Olympic Games were born. And it was also here that a council coup took place to save the town's cricket club!

If something's worth doing then do it yourself. That is Tim Pinches' motto and, true to his word, he has put this into practice by transforming the fortunes of his local cricket club whilst, at the same time achieving a life changing experience of becoming the Mayor of his town, Much Wenlock in Shropshire.

When the retired farmer found his beloved cricket club in dire straits, through lack of facilities and poor ground maintenance, and hardly any support from the town coucil, Shropshire Council and Bridgnorth District Council he, along with six others, decided to stand for election to improve the way the town was being run. This new group of people were all elected, and vast improvements are now evident in the town and, needless to say, the cricket club now has more support. After just a couple of years in office, Tim found himself serving as Mayor in 2009-2010.

All this in the town where the modern Olympic Games, as we know them, started. The town, with a population of just over 2,600, is soon to become known worldwide with the recent introduction of the London 2012 Olympics' mascots, one of which is called 'Wenlock'.

It has also been suggested that Tim, because of his knowledge and love of sport, should be Mayor again during Olympic year.

Much Wenlock abbey predates William the Conqueror, and the town itself has buildings dating back to 1540. But the story of the modern Olympics began here. A local doctor, William Penny Brookes, started an annual athletics meeting. This became so popular it reached the ears of Baron de Coubertain, who visited the doctor to see the games and took the idea away with him. The rest of the story, as they say, is history.

To this day, the priceless documents relating to what was the inspiration and founding of today's Olympic games are still in the possession of the town. Now the council are trying to raise the money to create an Olympic museum in Much Wenlock.

Much Wenlock Cricket Club has been at the heart of the community since 1870 and, for well over one hundred years, has played on the town's Gaskell Field, next door to where the Wenlock Olympic Games were first held in 1850, the same year the first cricket match was played in the town. But, despite its sporting inheritance, the village cricket club had declined in recent times.

Tim, who had retired from farming after a heart attack and a coronary by-pass put an end to his working life, took the opportunity to help revive the club's fortunes.

With just twelve playing members and a ground that had long been neglected, he sought the assistance of friends, including the club's current vice-chairman, Mike Grace. Between them they wrestled control from the county council, first, by taking over the maintenance of the square and, subsequently, the outfield.

"I never put in less than a couple of hours a day," says hardworking Tim, for whom it is plainly a labour of love. Together with another Much Wenlock CC enthusiast, Keith Banks, they became the club's groundsmen.

The club put together a five year plan and approached the English Cricket Board (ECB) and other funding agencies for help. Having played football for Wellington Town, and been good enough to have had a trial for Wolves, Tim had plenty of friends in the sporting world he could call on for advice. Their early aims were to:

Now, five years later, the world of Much Wenlock cricket has changed immeasurably. The club has:

• permission for a new two-tier pavilion
• got a long term agreement with the local council, as owners of the field, that the club are its principle user/occupier
• taken on full responsibility of all grounds maintenance issues
• completed a playing surface review with Shropshire County Cricket Board resulting in a good report
• achieved sponsorship for two new site screens costing £1,500; three raised covers costing £8,000 and secured an award from the ECB of £3,500 to buy a new dedicated cricket mower
• achieved Club Mark status and now employ an overseas player/coach 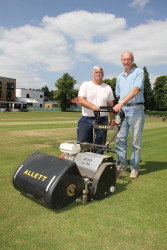 The club now runs three cricket teams. Their coaching extends all over the area, with ECB accredited members coaching at six local primary feeder schools and the adjacent secondary school. They have attracted one hundred and twenty new youth players to join the club.

Sunday morning sees a two-hour coaching session in their nets, and there are plans to start a girls team. The club also hosts an annual Kwik Cricket Tournament which is held as part of the town's 'Olympian Games', with over eighty local children participating.

The club is going from strength to strength under the new management structure, with plenty of volunteer members pitching in to help with coaching and running the club.

Tim and Keith have formed a formidable grounds team, who spend over thirty hours a week preparing and repairing the playing surfaces.

Having to cater for three teams and a large junior section, plus other bespoke games, involves a lot of work for both of them.

The outfield is cut two or three times a week using a Hayter LT324 triple mower, which has been kindly loaned to them by The Edge Adventure Centre. They also have an old Atco ride on rotary mower as back up. The square is cut and prepared using their brand new Allett C24 pedestrian cylinder mower.

"We have a 'very fast' outfield," Tim chuckled, "and some very fine batsmen." He rejoiced in telling me of a recent game when, having scored over 400, they skittled their opponents out for just over 50. "It could be the biggest winning margin ever recorded in these parts."

The square, at present, only provides eight strips. Tim is looking to increase the size of the square by adding a couple of new junior tracks, as soon as possible, to accommodate the ever increasing youth teams.

The club has been using Kaloam (31% clay content) for a number of seasons and are pleased with its performance. Tim and Keith like to spend at least ten days prepping new wickets to ensure they perform well and, once it comes into play, they try and keep it going for at least four matches.

The club also works very closely with the adjacent William Brooke School, accommodating many of their matches on the square and artificial strip during the summer months. They also welcome a number of touring sides. Whilst I was there, Tim and Keith where busy preparing a wicket for an evening match against a strong touring party of twenty five students from Delhi.

These games are great for promoting the club and give their players the opportunity to improve their skills against good opposition.

Raised covers have recently been purchased, and are used to control the moisture in the wickets during preparation. An increased cutting regime on the outfield has improved smoothness and levels. However, there is still a large plantain problem that Tim wants to address with some deep aeration and spraying off with a selective weed killer.

The club undertakes end of season renovations themselves, cleaning off the square, scarifying in several directions and topdressing with new loam and seed. Tim applies between five and eight bags of Banbury K loam to each pitch and overseeds with a perennial rye grass mixture.

In April 2009, the club members took part in a very successful Cricket Force weekend, installing new shower facilities and undertaking a complete makeover of the existing clubhouse to ensure it complied with Shropshire County regulations. They are hoping that it will just be a short-term fix until they get their brand new clubhouse, which is scheduled to be completed in 2012.

The planned clubhouse will take the club to a new level, providing excellent facilities for both off and on field activities.

Tim is hoping the local football club, who play on the outfield, will buy into this new facility, along with the local community using it for weddings, corporate hospitality and many other functions.

The benefits, in terms of sports provision, are enormous for the town. Replacing the old clubhouse will also complement the brand new William Brook School building.

Tim has thoroughly enjoyed his dual roles of being an ambassador for the town and helping to mastermind the improvements to Much Wenlock cricket club and ground.

A final extraordinary fact in this extraordinary town is that Mike Grace, the crickets club's current vice-chairman, has now taken over from Tim as the Mayor of Much Wenlock. It would appear that the idea of getting cricket club members on to the Town Council has paid off handsomely, both for the club and for the town.

Tim with Town Clerk, Sharon Clayton, and a presentation from the British Olympic Committee. The handwritten inscription reads:

"To the people of Much Wenlock. We hope you are as proud of Wenlock as we are. It was very important to us that our mascots are anchored in Olympic and Paralympic heritage. Thank you for letting us share your story, and we hope that you will follow Wenlock and Mandeville's journey to 2012." Sebastian Coe