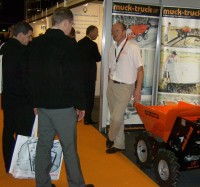 Commenting at a recent exhibition on how there had been an upturn in business, Muck-truck distributor Steve Eaton of Severnside Plant remarked on how enquiries from the retirement sector, for instance, had suddenly mushroomed.

"There is no explanation for it," commented Steve, "It is not as though we have suddenly started targeting the market, but who's complaining?"

To illustrate his point Steve told the tale of Mr Petri a customer from Somerset who had just purchased a Muck-truck from him to clear a field on his 6-acre estate so he can introduce pigs to the site.

As the area had once been used as a tip, Mr Petri bought the dumper to remove the rubble, bricks, stones and lumps of concrete that had accumulated over the years. Mr Petri was impressed by the robustness of the Muck-truck and its ability to cope with the ups and downs of his terrain.

This plus the compactness of the unit enabling the truck to work in tight areas and pass through an existing narrow gateway made the Muck-truck the obvious choice. "I just couldn't have coped with my existing tractor and trailer on this rough hilly ground," Mr Petri had said.

Powered by a Honda GXV160 5.5hp engine, the Muck Truck micro dumper has a ¼ tonne payload with a hopper that can be removed in seconds and converted into a flat bed transporter.

Only 28in (71cm) wide and able to pass through a standard gateway, the Muck truck has three forward speeds and reverse plus four-wheel drive.

The dumper has a carrying capacity of 6 cu ft. (220 litres) and can climb up 30 degrees carrying ¼ tonne. Other attachments include loading ramp, extension sides, ball hitch, snow blade and vacuum.