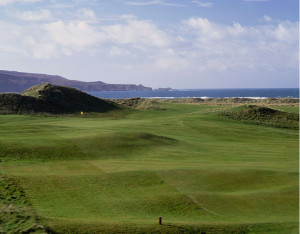 Greenkeeper Dean Muir is swapping Muirfield, where he was involved in preparing the course for two Opens, for Machrie on the island of Islay.

Originally from Dunbar, where he shot a course-record 62 eight years ago, but now living in Bonnyrigg, Muir is excited about his switch from one side of the country to the other.

He has worked at Muirfield for 17 years, the last nine of which have been as deputy course manager to Colin Irvine, but it was time to become his own man as a head greenkeeper.

Though it might not involve the likes of Tiger Woods, Phil Mickelson and Rory McIlroy testing out his fairways and greens, Muir is relishing the chance to play a part in breathing new life into historic Machrie.

Its new owners, the multi-millionaire and past BBC chairman Gavyn Davies and his wife Baroness Nye, have exciting plans for the iconic venue.

They have engaged East Lothian-based DJ Russell, who designed both courses at Archerfield Links, to make changes to the course and, as from Monday week, Muir will be tasked with its upkeep and conditioning.

"It is something different to what I'm doing just now so I am looking forward to it," he said. "DJ Russell is involved in making some subtle changes to the course to bring it into the 21st century.

"I appreciate there is a lot of history at Machrie but it is needing updated and it's going to be a very exciting project to be involved in.

"I've been at Muirfield for 17 years, the last nine as deputy course manager, but it is time to move on.

"To be honest, there's not a lot of jobs that come up that have really interested me, but this is one that certainly whetted my appetite.

Read the full article from the Edinburgh Evening News HERE