0 Mulberries in the spotlight 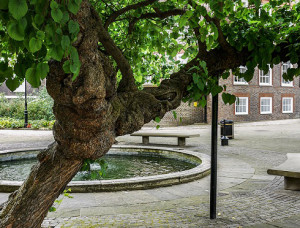 Some of London's oldest trees will be coming under the spotlight thanks to a new campaign supported by the Heritage Lottery Fund.

This new project will kick off with the launch of a new, interactive website, www.moruslondinium.org, packed with information and facts about the mulberry, where events, activities and recipes will be displayed. A short animated film to explain the mulberry story is in production. The first event, a free walk during London Tree Week led by Dr Peter Coles, Visiting Research Fellow at Goldsmiths (University of London), is already oversubscribed but others are being planned to help Londoners discover some of the tales told by the capital's mulberries and will be added to the website.

Mulberries and their place in the life of London over the centuries have long interested Peter Coles, who first approached The Conservation Foundation with a plea to help preserve and publicise London's precious mulberry inheritance. Morus Londinium is the latest of the Foundation's tree projects which include elm programmes for London and Sussex and We Love Yew, all supported by the Heritage Lottery Fund and the Great British Elm Experiment.

Mulberries have been grown in London since Roman times, when they were planted for their unique and delicious fruit, which perishes soon after it is picked and so cannot be imported fresh. Mulberry trees were often associated with medieval abbeys and monasteries in and around London, where they may have been grown for their medicinal virtues.

The unusual home-grown fruit brought an exotic flavour to the tables of fashionable nobility in Elizabethan times. Some of London's mulberries may date back to the 17th century, when they were planted to provide food for silkworms in James I's attempt to start a silk industry to rival that of Italy and France.

In addition to the expanding national mulberry collection in the private gardens of Buckingham Palace, mulberry trees can also be found in London's streets and back gardens, as well as public parks and heritage sites. Some of the older trees may be the only survivors of a lost past, destroyed by fires, wartime bombs and the accelerating march of progress. They can also provide fruit for urban foragers, and can be eaten raw, used in traditional British cuisine, or provide a prized fresh ingredient rarely found in England but at the heart of specialty dishes from Iran, Syria, Turkey and elsewhere.

However, only a few of these valuable trees have been recorded and their true histories often unknown. The Morus Londinium project is therefore calling on Londoners to help hunt down and record their local mulberry trees on the website as part of the first comprehensive survey ever.

David Shreeve, director and co-founder of The Conservation Foundation commented: "We're delighted to have secured funding from the Heritage Lottery Fund to bring this project alive, and are calling on Londoners to take part to help uncover our mulberry tree heritage. You can join one of our tours, record a local mulberry tree on our online map, plant a free King James I sapling for your school or group, or try your hand at a delicious mulberry recipe."

To find out more, visit www.moruslondinum.org or contact The Conservation Foundation on info@conservationfoundation.co.uk