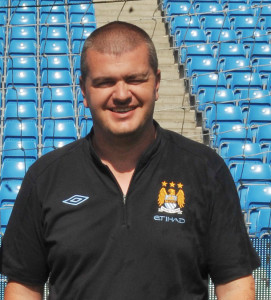 Lee Jackson is Head Groundsman at Manchester City Football Club (Etihad Stadium). Lee is pitch expert group member at ESSMA and was named as the Premier League Groundsman of the Year for season 2010/11. ESSMA interviewed him concerning the multi-use of stadiums in general and Manchester City's multipurpose Etihad Stadium

How important is a multifunctional stadium?

Multifunctional stadiums generate much needed extra revenue for clubs at a time where economies are suffering, as well as having to satisfy FIFA Fair Play rules.

The Etihad Stadium is a multipurpose stadium. What kind of other events are organized?

The origins of the stadium date back to 2002 when the Commonwealth Games were held here and the stadium had a running track. Since it was reconfigured to football in 2003 we have had over 25 nights of concerts by various artists, boxing, both men and women's international football, international and domestic rugby and the 2008 UEFA Cup Final, as well as satisfying the needs of the football team.

On average we will have between 40-50 pitch uses a season in regards to football and rugby. At the end of every season we hand over the pitch to our events team for a month. It is up to them to go out and attract the concerts with our partner SJM.

What is the relationship between pitch management and the board?

Internally we are consulted on all events which are to be held on the pitch and this works very well. Whilst I obviously want more time to grow the grass during the summer, we feel that the compromise between ourselves and the events team works very well. We tried and tested to the point that we are comfortable with what we have, which in turn allows essential revenue to come into the club.

See the rest of the article on the following link ESSMA