0 Municipal Course has a Premium Approach with Abberoyal 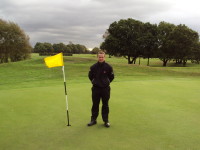 Golf course manager Paul Murray takes pride in his job and is determined that his municipal course will be as good as any private courses in the area.

As the Altrincham Golf Course is in Cheshire there is no shortage of competition, but the attention to detail and the improvements made have not gone unnoticed.

"People are surprised at the standards here; they are not what you expect from your usual municipal course. We just want the highest standards possible with the budget we have and we want to keep on improving," explained Paul.

With a tight budget and restricted renovation time constraints, he has overseen a successful overseeding programme, investing in a quality seed - AberRoyal from British Seed Houses - and hiring a seeder to ensure a perfect application. The results have proved such a hit that he has started to do the same at the William Wroe Course in Flixton, Manchester, which is also run by Trafford Community Leisure Trust.

Paul learned his trade on private courses and took on his role at Altrincham eight years ago. When he arrived there was little in the way of a planned maintenance programme, no aeration of greens and no seeding. The approach appeared to be one of putting nitrogen on to green up the greens and getting them to look good.

He changed mowing regimes, acquired better machinery and looked to set it up as a private course would, improving the general standard of maintenance of the course.

Paul said: "We have been using AberRoyal for two-and-a-half years now and you cannot argue with the results. I went with it after meeting Paul Moreton from British Seed Houses at the BIGGA Show in Harrogate and it has been the right decision.

"We have cut down on nitrogen input and cut down on feed as a whole in line with using AberRoyal. The greens have improved year on year with better quality swards and we have virtually no disease at all.

"We did not have any budget for seeding, whether for greens or divot mixes, when I first came here but I have been able to build a small amount year on year. It is not a big budget but buying the right seed and hiring a seeder is money well spent. We cannot afford to buy a verti-seeder but hiring one enables us to do the job efficiently and after ten days you can see the lines of seedlings coming through.

"It is hard work getting greens to look right and to a good standard. We are getting more feedback from the golfers who see the greens are as good as anywhere really
They have noticed the difference over the last few years with the maintenance we have been doing and the outcomes from it and they say generally it is not what you expect from a municipal course."

Paul Moreton of British Seed Houses said: "Paul really takes a pride in his work and appreciates that even with a tight budget it is worth spending money on quality seed. It is an investment that pays off and it is so rewarding to see the amazing results he has achieved. AberRoyal came out of our breeding programme at IBERS* and is the only UK bred browntop bentgrass available to greenkeepers. It is gratifying for us to see our investment in breeding in the UK, pay dividends for greenkeepers like Paul up and down the country.

"I admire his ethos and believe other municipal courses could learn from his professional approach and his determination to match the standards of private courses when his resources are so limited."