There should be a book written: 'It shouldn't happen to a municipal golf course greenkeeper'.

Take the five greenkeeping staff at the award-winning Heaton Park Golf Course in North Manchester. They have to tend a 5,755-yd par 70 course with as many undulations and ravines as a small Himalayan valley.

Tough on the old pins for sure, but it's when you take into consideration the kind of traffic that hits Heaton that you have an idea of the scale of the unenviable task facing the staff here. Last year saw a staggering 40,000 players attack the course's fairways and greens. There's also the mightily popular 18-hole par three course to look after as well, which alone had 31,500 punters raising their clubs in anger on it last year.

Basically, keeping the courses in any semblance of reasonable nick (which amazingly they are, and then some) is an ongoing all-out war with this corps of keepers battling against divot-taking-but-rarely-replacing hackers, flagstick pinching urchins (70 went from the main course and 50 from the par-three last year alone!) and the charming chappies who churn up the courses' greens on their dirt-bikes in the wee small hours rendering them unplayable.

Yet, somehow Andrew Street, Heaton Head Greenkeeper, his assistant Vinny Casey and their small team, soldier on and, no matter what is thrown at them, invariably come up smelling of roses.

The course was recently voted: 'Best Municipal Course' by readers of the fashionable Golf Punk Magazine. Designed by five times Open champion J.H.Taylor, Heaton first opened to the public in 1912 and winds its way down dingle and up dell over three lake-filled gullies.

The signature 193-yard par three 11th, which requires an immaculately struck tee shot to a picturesque elevated green, was described by former Open champion Henry Cotton as "the best par three in England".

So how does Andrew and his team do the course justice and keep their hair in the process?
"Their backs are pretty much up against the wall all the time," admits Brian Dique, General Manager for Playgolf Heaton Park, which runs the course on behalf of Manchester City Council. "Especially as we've only got a budget for greenkeeping of £33,500, which would come nowhere near some private courses, particularly when you bear in mind we've two courses to maintain."

"The biggest challenge is the golfers!" says Andrew, who learned his craft "before he could crawl" from his greenkeeping dad. "It's hard, because it's unbelievable how many golfers there are out there once it goes past 9 o'clock midweek. They're firing balls at you and you can't get round the course. It doubles the time of every job you'd be doing on a private course, because they just won't get out of your way."


Brian chips in: "It's the lack of etiquette from a lot of the players. On a private course the greenkeepers always have right of way, here they've no chance. It's just a lack of knowledge from some players about that side of it." "They don't like replacing divots on here either, or pitch-marks, which is a big problem," notes Vinny. "That's something we have to do in the evenings; there's simply not enough hours in the day to keep up with it." 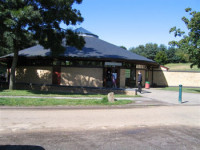 Consequently, these greenkeeping 'grunts' have to cut their cloth, fairways and greens accordingly. "At the start of the season we've a slower growing-in process, because we've been played so heavily throughout the winter," says Vinny. "Whereas everywhere else will be up and running by April 1st, we're a month or so behind that. With it being so open as well it gets so weathered, the grass is a slower grower."

And just as those that tend them have to be tough, the greens, too, need a good degree of resilience, given the punishment they receive. They are made up from a blend of bent and meadow grass; pure bent is out of the question. Like most things at Heaton, a degree of realism about what can be achieved is required.

"A lot of our greens are old clay-based ones, not like the new sand-based greens, which need water and plenty of fertiliser," says Andy, "Our greens were built to retain water, so you have to look after them the old-fashioned way. We haven't got an irrigation system so you can't plan fertilising, you've got to solely rely on the weather.

"It is a different ball game. You can't cut your greens at 4mm when you're going through a drought; you've got to let the leaf grow back in to get the moisture back into the ground." The team are as environmentally friendly as possible - not spraying and generally avoiding any use of chemicals. Furthermore, a 'live and let live' policy is pursued when it comes to the course's furry inhabitants.

"People love to see the rabbits - what with it being essentially a city course," says Andy. "Realistically what damage do they do? They dig in your bunker edgings, they do a bit of scraping on tees, but it's nothing major that can't be repaired. It's nice to see all the wildlife - you're having a pint in the clubhouse and you look out…and there's 20 flaming rabbits chewing your first tee up!"

Joking aside, the real threat to the course comes from two- rather than four-legged animals. "We're on constant daily repair duty of damaged greens," despairs Andy. "The pitch and putt's the same. What upsets us more than anything is people who don't respect these greens and take divots playing irons off them."

"And that's before we get to the motorcyclists," sighs Brian.

"At the moment he's got five greens to his name," Andrew shakes his head. "Last year the 15th green was one of the best on the course, but then you come down one morning to see these deep tyre marks and it breaks your heart. But there's not a lot we can do."

As a municipal facility, Heaton Park is open to all and sundry to come on the course, reflects Brian. "In an ideal world we'd love to surround it with a 20-foot fence but as a public park protected by legislation you can't do that. You have to work with what you've got." 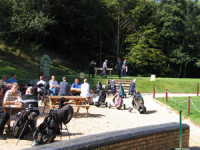 Indeed, 'working with what you've got' would seem to be a good maxim for municipal course greenkeepers. Those at Heaton have mastered the art of 'creative greenkeeping' and an ability to turn their hands to many different tasks; in addition to greenkeeping, the team have been busy this winter in the heavy plant hire, constructing new tees, as well as with carrying out building maintenance work. From the clubhouse in which we sit talking, we can see an immaculate newly constructed tee area overlooked by a neat and inviting gravelled patio area complete with its own benches and tables. It's all the greenkeepers' work, including the furniture.

"It's all about making the most of your resources," explains Vinny. "We built the benches and tables out of scaffolding planks and the steps and what have you out of old sleepers cut to size. Some of the lads have got a background in construction, which serves us well. We've got a good mix of experience and age here, which means we work really well as a team."
Just as their experience has grown, so too has the course's stature, following Andrew and Vinny's arrival at the club seven years ago.

"When we came here the course was all cut one height by the park staff," reflects Vinny. "We got the machinery in to define the fairways, the semi-rough, the rough, the aprons, because there was no definition whatsoever. So we've put a lot in to this course."
Now, the course is in such a good shape that for the second year running, it was chosen to host the 2006 Faldo Series North West Golf Tournament, held in March, as well as the Manchester Municipal Golf Challenge.

Such endorsements represent a challenge but are a source of pride for the team in a job that is often a thankless one. The biggest reward for the lads, though, is the knowledge that their efforts continue to provide some of the best, most accessible and most affordable golf for the public in the country.
Vinny enthuses: "We're all local lads and because so many people live and play the course, it's a real buzz when you bump into them in the pub or the street and they say: 'I played your course today, it's absolutely brilliant.'"