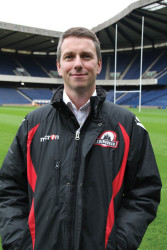 It has been a couple of years since I last visited Murrayfield - Scotland's National Rugby Stadium and home of the Scottish Rugby Union (SRU) - and, in that time, there has been a number of changes both on and off the field of play.

John Litster, the former man in charge of the pitches, has been promoted to Facilities and Event Safety Manager, responsible for overseeing several operational activities within the stadium, including all pitch matters, health and safety, crowd control and coordinating all stewards and emergency services on match days.

John came to Murrayfield nine years ago, after a career in greenkeeping and a post at Elmwood College golf course teaching students the practical skills of grounds maintenance. In that time, he has taken on many roles and seen many changes in the way the stadium has been run to meet the demands of a modern facility.

"Typical of most international stadiums, Murrayfield is a multi use facility," says John, "being used for entertainment and corporate events alongside the sporting activity. Two concerts are already planned for June next year."

"However, Murrayfield is untypical in that it has a large area of land adjacent to the stadium that provides both natural and artificial grass pitches for various teams to play and train on."

Currently, these are used by Scottish national sides at all levels, Murrayfield Wanderers RFC and women's rugby teams, along with many school and college sides. The area is also used for car parking during international matches.

The SRU has, in the past two years, gone through a period of change replacing the old soil based pitches with three new ones, along with an IRB standard, third generation (3G), Lano artificial pitch. All the pitches are floodlit, fully drained and have ameliorated sand soil rootzone and pop up automated watering systems installed.

"Due to the heavy demand, the management of these pitches is crucial for their success," says John. "We restrict the natural turf pitches to ten hours use per pitch, per week, the aim being to ensure they remain in the best possible condition all year round."

The SRU has invested heavily in stadium improvements, which has seen upgraded turnstiles, new state of the art television screens and the purchasing of six MU360 lighting rigs from SGL (Stadium Lighting Growth). "The SGL systems have, without a doubt, been the most important technology the stadium has ever invested in," he says, "which has helped to improve the condition of the pitch dramatically."

"The six units cover a third of the pitch at any one time, and three passes will cover the whole pitch. It took some time to understand how to get the best out of the system, but we can now stimulate grass growth during the winter months - a rarity in Scotland."

The lights remain on 24/7 and are moved on a three day cycle. An E-Z-GO utility vehicle is used to tow the rigs into position and, John says, care has to be taken to ensure that the wheels of the rigs are set in different locations to reduce wear and compaction.

Two additional MU360 single units were also purchased for areas of heavy wear, for example, where logos have been painted.

"Before we had the lights, the combination of a heavy fixture list - over fifty a year - poor weather and low temperatures meant that the grass was always under stress and prone to damage, especially during the depths of winter in January and February."

Even with SGL's training, John says that the vagaries of the Murrayfield stadium presented a steep learning curve for the groundstaff, but now they have everything down to a fine art, being able to move all six rigs in under thirty minutes.

The pitch profile is a modern, free draining fibresand, with undersoil heating that is often on for long periods during the winter months. "Soil and air temperatures in the stadium can often be 10-15 degrees lower than other national stadiums in the UK," John states.

The stadium is always a busy place for John and his staff. "We have recently gone back to doing all the work in house," says John. "In the past, we were sharing the workload with Sportsmasters, a local sportsturf contractor whom we still maintain a close working relationship with here at Murrayfield and Firhill. They provided us with staff for some of the routine works and also supplied specialist machinery for our end of season renovations."

"Now, we have four full time staff, although we have retained our contact with Gavin. In fact, one of his former staff members, Michael Yan-Hip, has recently been taken on full time to work along side Peter Hope, Jason Tailford and the newly appointed Head Groundsman, Jim Dawson, who took up his new role on 22nd November. Jim has a wealth of experience, having previously been head groundsman at Falkirk football club for sixteen years." 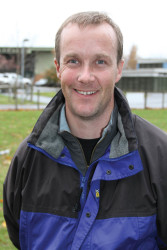 Jim was keen to work at the national stadium and applied for the post in October. He is excited about his new role and looking forward to working with all the staff at Murrayfield. He knows only too well the challenges he will face, in particular having to deal with severe temperatures, wind chill and rain, rain and more rain!

As well as the stadium pitch, the team are responsible for the training pitches, plus assisting with other venues when games are taken elsewhere.

To ensure that the work is carried out to the highest possible standard, the SRU has invested in new machinery. These include two new Dennis G860 cassette cylinder mowers, Ransomes Jacobsen machinery and a Wiedenmann aerator through our partnership with Fairways and Ransomes Jacobsen.

"Our ongoing maintenance regimes are pretty much the same as most stadiums," says John. "The aim is to present the pitch at its best. Presentation mowing is carried out with the G860s, cutting on a daily basis during the summer months, and gradually reducing the frequency as and when growth dictates. We cut at 35mm during the summer and early autumn, and raise it to 40mm in the winter."

"We also use our pedestrian rotaries for cleaning up after matches, which also helps to stand the grass up."

"Pressure to make our national sports stadium pay its way means that we also have to contend with a variety of non-sporting events. Unfortunately, we cannot survive on just two or three big money making international games a year. We have to supplement our sporting revenue with external business and, if that means hosting hospitality events - putting a marquee on the pitch so that our main sponsor can hold a dinner for instance, or erecting stages for concerts - then so be it. Every inch of this ground has to make money."

Despite the demands on himself, his groundstaff and his pitch, John is philosophical about the need for Murrayfield to support itself financially. Last year the stadium earned over £1.5 million.

As for end of season renovations, the level of work is dictated by the condition of the pitch. "However, sometimes, it can be a case of doing whatever we can to fit in around other priorities, such as concerts and corporate events," says John. "For example, in 2009 we were able to undertake a full renovation, with Stewarts Turf, who supply Murrayfield with materials, labour and large machinery, coming in under contract."

"Using their Koro Field Topmaker, they took off between 15-20mm of vegetation, power harrowed and reseeded with Barenbrug Bar 7 mixture. The weather was kind and the first green tinge appeared after four days. By day seven, the stadium pitch was fully germinated."

"In complete contrast, in May 2010, the combination of a hectic fixture list and a number of large corporate events led to us carrying out a more sedate renovation programme, which consisted of scarifying the pitch, hollow coring and topdressing with a straight sand (fifty tonnes) and overseeding with Bar 7."

With two major concerts pencilled in for late June - highly acclaimed American rock bands, Bon Jovi and The Kings of Leon, will be playing within the space of four days - the knock on affect is that John has to manage the way he will be organising this year's end of season renovations. "We won't have the time to implement a full blown renovation, so we'll look to complete two small mini-renovation programmes five weeks apart," says John. "This will be based around cleaning some debris out by scarification, aeration, topdressing and overseeding."

"Aeration is a key element to keeping the pitches playable, using a combination of different size tines and aeration equipment. We try to aerate the pitches on a three to five week cycle, depending on weather, fixtures and usage."

Edinburgh is notorious for heavy spells of rain, which can create another set of problems. Fertiliser applications often leach out of the soil profile before they have had chance to feed the plant. The feeding programme is a combination of granular and liquid products, which tend be applied on a 12-14 day rota depending on the plants needs. Having the lights has definitely increased the amount of nitrogen required.

"With between 600-900kg of nitrogen being applied to the stadium pitch, it would seem the combination of the leaching, having the lights and undersoil heating are the driving factors of the increased feeding regimes. This, in itself, causes other problems, such as thatch build up, shallow rooting and soft leaf tissue. We are well aware of these issues and are working hard to understand the complexities of these issues."

John uses the services of the STRI, with Jay Dobson keeping an eye on the agronomic issues and reporting his findings and advising him.

"It's been an eventful nine years," says John. "I've witnessed some interesting times and learned a lot about stadium management. My new role may be somewhat removed from the day to day work of maintaining the pitch. However, I will be more than happy to ensure that Jim and his team have the right tools, equipment and training to ensure Murrayfield is up there with the best when it comes to providing a playing surface for Scotland's rugby teams."