Pressure to make our National sports stadiums pay means that Groundsmen have to contend with not only the demands of play, but also a variety of non-sporting events.

Murrayfield, a recent host in the Six Nations Rugby Tournament is no exception. Turf and Amenities Manager John Litster and his team have nurtured and protected their famous pitch through a particularly challenging year.

"We're on a very sandy root zone and because we had increased levels of meadow grass and a little bit of thatch we decided, in the latter part of May last year to take the surface off and re- seed," he explains. "As our first fixtures are usually around mid August and the Edinburgh rugby season doesn't start until September there should have been ample time for the new sward to establish."

Stewartsturf, who supply Murrayfield with materials, labour and large machinery came in under contract with their Koro Field Topmaker, stripped the surface and re-seeded with Barrenbrug's Bar 7 mixture. The weather was kind and the first green tinge appeared after four days. By day seven the stadium was covered in a green blanket.

At this point John learnt that Bob Geldolf's Live 8 concert would be staged at Murrayfield in four weeks time.

"A quarter of the pitch would be covered by the stage area which weighed around 300 tonnes, and the remainder of the surface would hold approx. 18,000 people," John recalls. "This would have been a challenge under normal circumstances, but with a five week old sward we had to take extreme precautions." 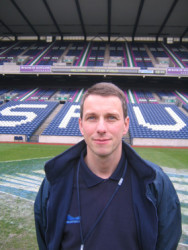 Completely flat metal decking was laid across the entire stage area in order to spread the weight evenly over the surface. John also decided to spray the pitch with a minimum strength growth retardant to conserve the strength of the grass and reduce the strong grass growth. "With hindsight I'd probably shy away from doing this again," he confides, "as it caused a few problems later on."

The rest of the pitch was covered with Terraplas a protective covering that allows water and light to pass through onto the ground beneath. Stewartsturf returned on John's instructions and sprayed this whole area with fungicide before the covering went down. This proved to be the right decision and is something that the Murrayfield groundstaff will repeat should they need to use Terraplas again.

"The stage area was covered the longest," continues John "as it takes time to build before the show and dismantle afterwards. In this case the sword was covered for 9 days but it can be as long as two weeks. Obviously the grass was yellow when we lifted the decking but we didn't lose more than 50%." Stewartsturf returned to scarify this area of the pitch, before over seeding with Barrenbrug's Bar 7 mixture, and finally applying a liquid feed. The weather was good and new growth appeared within 7 days. "The whole thing came back within 6 weeks," John confirms.

Despite the fact that the Terraplas covering, laid at the last minute, was only down for 3 to 4 days, it caused it's own problems. "The product is designed in panels with each panel having 16 circular "feet" to ensure that there is space between the covering and the grass," John explains. "When we took it up we found thousands of circles all over the pitch as a result of the pressure, and this left depressions in the rootzone" Gavin Brown Manager of Stewartsturf's Groundcare division brought two of his team to join Murrayfield's groundstaff as they hand forked and top dressed the worst affected areas to get the levels back.

Once this had been achieved a granular fertiliser was applied. Debris was also a headache. "Understandably, when you're dealing with that number of people over such a large area there are bound to cracks in the Terraplas when you take it up. We spent days walking the pitch, picking up everything that had got through" John remembers. "The worst things are screws, as, once the season starts just one can cause serious injury."

Thanks to the diligence of the stadium's groundstaff, and once again the weather, Murrayfield rose to meet the new season. Home to the Edinburgh Gunners, and host to numerous national and youth events, rarely a week goes by from mid August to the end of May without a game on the famous ground. "What none of us are keen on is a "double header," John confides. "This is what we call a situation where a main game is directly followed by another, and there's no time to repair the pitch."

Despite the demands on himself, his groundstaff and his pitch, John is philosophical about the need for stadiums to support themselves financially. "Unfortunately we can't survive on just 2 or 3 big money making games a year," he says. "We have to support sporting revenue with business, and if that means hosting hospitality events, putting a marquee on the pitch so that our main sponsor can hold a dinner for instance, then so be it. Every inch of this ground has to make money."

For further information on Materials and Groundcare services contact Stewartsturf, on Tel: 0800 970 8577