by Myerscough College
in Training & Education
on 27 Dec 2013

The new 2013/14 academic year is now well underway, and has already brought its share of success, with Myerscough College learners being recognised in a number of national award schemes. This article reflects on their success and the important role that employers play in developing and training the next generation of turf professionals.

Sam Evans, who has undertaken a Level 3 qualification in Sportsturf whilst working at Oakland Park Golf Club, was named runner up in the Toro Student Greenkeeper of The Year Awards for 2013. There was further success within the awards for Myerscough too, with fellow learners Daniel Hardy and Joshua Thorley, also making the final shortlist.

Head Greenkeeper at Oakland Park Golf Club, Graham Down, comments on Sam's success and the training programme with Myerscough College saying; "As a club, we are extremely proud of Sam and his achievements within the TORO Student Greenkeeper of the Year competition. He has worked extremely hard and it is fantastic for this to be formally recognised by others. The quality of training from Simon and all at Myerscough is exceptional. Over the years, we have trained several members of the team, and they have all developed considerably over the duration of the training programmes. The training is up to date, to the latest industry standards and we are also heavily involved in tailoring the provision to suit the needs of our club. We receive regular reviews and feedback to ensure that all our learners achieve on time."

Sam's Workbased Assessor, Simon Dadge, also comments on the reasons behind the nomination, saying; "Sam was an excellent student and it was quite a simple decision to enter him in to the competition of Greenkeeper of the Year. Sam worked effectively through the course with the E-Portfolio enabling him to work at his own pace and keep him up to date with all the assignments and projects. The work was always to a high standard and covered the practical and knowledge criteria with that little added detail. I will be keen to see how Sam progresses through the industry and wish him well in the future."

BIGGA Learning & Development Manager, Sami Strutt, said; "The standard was again superb this year and we were very impressed by the high level of knowledge demonstrated in the students' technical reports, and also their composure in a tough interview situation. We wish all the finalists the very best in their future greenkeeping careers."

Also, greenkeeper Michael Coleman, now of Willesley Park Golf Club, became the only Horticulture Apprentice nationally to reach the final stages of the 2013 National Apprenticeship Awards. In a ceremony for the East Midlands regional finalists, Michael was 'Highly Commended' by the judging panel in the Intermediate Apprentice of the Year category.

Michael said he was delighted to be recognised; "I knew I wanted to become a greenkeeper but, having struggled at school, I found finding a job really hard. However, Kedleston Park Golf Club was willing to give me a chance and I worked hard to complete my apprenticeship with the support of Myerscough College."

"Apprenticeships are a great way for young people to do a paid job and get proper recognised training. The apprenticeship has given me the skills and confidence to progress and I've now moved on to a new role at Willesley Park Golf Club."

Workbased Assessor, Jonathan Knowles, also comments on what makes Michael's achievement special, saying; "In retrospect, it is fair to say that the classroom based activities just didn't suit his style of learning, and school in general caused him a lot of frustration. At his induction on the apprenticeship it was clear that literacy was his weakness and, because of this, additional learning support was appropriate for Michael."

"However, his attitude and work ethic were exceptional and, to his credit, his mental numeracy and arithmetic was astounding. He played this to his strengths when completing his Pesticide Application Awards with its convoluted maths problems."

The NPTC assessor said, after years of assessing experience, that he was really impressed with Michael's calibration maths - "how he can work it out in his head is remarkable."

Michael continued to work hard for his employer, taking on more and more responsibility for tasks and working independently.

"Michael was really pleased with his achievement and his contribution to Kedleston Park Golf Club," continues Jonathan. "I know that he was especially pleased with all his new abilities to name trees, shrubs, weeds and grasses by visual identification; not only by common, but also the scientific (Latin) names, a real achievement for him overcoming his literacy hurdle. He successfully completed his apprenticeship, within our agreed timeframe. He has now moved onto a new role and I am sure the future is bright for Michael."

Michael's mother, Patricia Coleman also speaks of his achievements, saying; "Having played golf with Mike at Kedleston, I soon realised the passion and pride he has for his job. He was pointing out maintenance work he'd done, naming grass types and even telling me the Latin names of trees. I was amazed by his enthusiasm and knowledge and knew he'd found his niche in life. Without Jonathan's support and efforts to find the right methods to teach Mike, his achievement today may never have been possible. Apprenticeships really do create life changing opportunities for young people."

As a college, we continue to expand our employer base through the hard work and dedication of the Employer Services Team. Already this year, they have helped with the promotion and recruitment to over fifty apprenticeship positions, many within the sportsturf industry across the country. 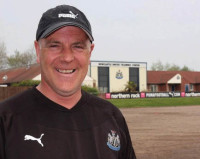 We also aim to support employers as much as possible with the training and up-skilling of their existing workforce.

A recent high profile addition is another Premier League Football Club, Newcastle United. They have engaged with the college to deliver Level 3 Advanced Diplomas in Sportsturf to three of their groundstaff. Christopher Coleby, Connor McEwan and Mark Cooper are all working under the direction of Mick Curran, Head Groundsman at the club's training complex.

Training is delivered in the workplace via the local Workbased Assessor, Vincent (Vinny) Price. He said; "I am thrilled to be delivering the training at Newcastle United FC. The club are clearly taking the training and development of their staff very seriously. Working in conjunction with the supervisors, in such a professional set-up, is ensuring that Christopher, Connor and Mark will receive the best training experience possible." 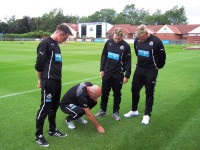 Mick Curran, Head Groundsman at Newcastle United FC said; "It was clear, straight away after speaking to Myerscough College, that the training they deliver is of the highest standard. The workbased delivery model is great as time off the job is kept to a minimum. I am also really pleased to be directly involved in developing the training plan with Vinny, and I know Christopher, Connor and Mark will develop in terms of knowledge and work competence from completing this qualification with Myerscough College."

Central to the ethos at Myerscough College is the industry knowledge and experience of the assessors who deliver the training. Philip Lomas, National Work Based Training Manager reflects on his own career and on some of the learners he has supported, saying; "I worked myself as a greenkeeper at Werneth Golf Club for several years, completing my NVQ Levels 2 and 3 in the early days of work based training with Myerscough."

"Then, in 1999, I became the first full time Workbased Assessor and built up a cohort of learners throughout the North West and into Yorkshire. The highlights for me are witnessing first-hand the progression of learners with their qualifications and within industry. There are too many to mention them all, but many are now notable figures within the turf sector." 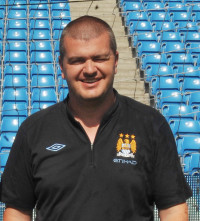 "Lee Jackson from Manchester City studied Levels 2, 3 and 4 under my tutorage, rising from Groundsman at Maine Road to Head Groundsman at the Etihad Stadium, and is regularly acclaimed for the quality playing surface he maintains. He has since also completed a Foundation degree with the college. We also deliver to the next generation of groundsmen at the club, and its testament to the embedded working practices and systems that are trained in the early days."

"As our Workbased provision grew, new assessors were employed and I was promoted to training coordinator in 2004 and to National Training Manager in 2009. I now line-manage thirty-seven assessors covering fifteen different schemes, at locations across the country delivering to around 1,500 learners. Sportsturf is by far our biggest provision, and one that continues to grow."

"Employers remain a critical component to our success and it is key that what we deliver is relevant and to the highest standards. As for the future, who knows, but the outlook is looking very positive."

If you would like to find out more about how you can get involved in the training and development of new or existing staff, or further your own professional development, please contact Myerscough College Employer Services on 01995 642255 or email; employerservices@myerscough.ac.uk

"It's no coincidence that so many top venues around the world feature groundsmen who have trained at Myerscough College. The facilities, the quality of the teaching and the support the College gives is second to none and I, like so many others, am very grateful"

"It's fantastic that, as a club, we are able to offer two local young people an apprenticeship, and I wish them well in their new careers at Blackpool Football Club"