The ceremonies see many students presented with outstanding achievement awards, rewarding their efforts over the duration of the course. This year saw eight Sportsturf students given awards as the top students on their courses. 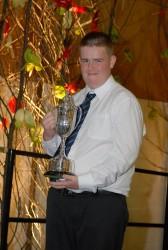 The awards recognise the exceptional dedication and commitment that they have put into their studies.

Paul Cook will now move into full time employment. Robert Clare will begin the Master Green Keeping Award. Peter Leach will continue to work as Deputy Course Manager at Exeter Golf and Country Club where he hopes to put all of the skills he has learnt into practice. Mark Willis is looking for an apprenticeship within the Sportsturf area. David Golding and Stephen McGrath will now progress on to the next level of education at Myerscough College.

Congratulations from everyone at Myerscough College, and best wishes for the future.