by Peter Britton
in Golf, Conservation & Ecology, and People
on 15 May 2016 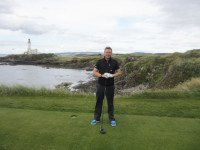 Arriving at Nairn Dunbar straight from school, the club's new Course Manager, Richard Johnstone, has now amassed fifteen years service; a mere drop in the ocean compared to some of his colleagues.

In this article, he details his job progression and how he has come to be leading such an experienced team

Some ten years ago, I flew to Inverness to play three courses in the region; Boat of Garten, Nairn Dunbar and Spey Bay. My golfing buddy was a member at all three clubs and our respective partners at the time were also keen golfers.

I had been promised three very different courses and we played them in the order mentioned above. 'The Boat' was truly beautiful, Nairn Dunbar rugged and Spey Bay 'exposed'. I tackled each with varying degrees of success - judged on a failure to enhance my bank balance - but came away with an overwhelming sense of achievement at having 'got round' three very different courses in three cold November days.

I guess many a golfer judges a course not only by its degree of difficulty but also by the 19th and, in that respect, us southern softies were well received at all three with typical Scottish hospitality.

At Nairn Dunbar, I recall having a chat out on the course with a gentleman of similar age to me whom, it transpired, was the head greenkeeper. I had only recently joined Pitchcare, so our 'chat' soon became a discussion about the condition of the course in November; it was good, if a tad wet underfoot, but my protracted discussion soon had my playing partners tutting as they strolled off down the fairway in varying directions looking for their respective balls.

As I have now discovered, that gentleman was Derek Roy, and there is no other purpose to this preamble than to introduce the man who has taken over from him recently, Richard Johnstone.

"I have been here for fifteen years and, in all that time, Derek always believed in my ability. He used to say that, one day, I would be course manager here at my home club although, as a youngster straight out of school, that was hard to believe."

Nairn Dunbar was officially opened in 1899 by Sir Alexander Dunbar of Boath who not only donated his name, but also sixty acres of gorse, through which the course was formed. Much of it is still in evidence today, and from the very outset, as an accurate drive is required off the 1st tee.

Once the 1st has been mastered (it wasn't, in my case), the course provides further challenges with plenty of hazards, including narrow fairways, pot bunkers, out of bounds, greens surrounded by gorse and plenty of trees and shrubs. There is even a water hazard to contend with and, just when you think you are 'almost there', the course provides two par 5s and a long par 4 to finish with. Perhaps this is why one is greeted so warmly in the clubhouse; out of sympathy!

In recent years, the club has hosted the Scottish Ladies Championship, the Scottish Boys Championship and the Senior Home Internationals and, whilst it has better known golfing neighbours, it more than holds its own on Scotland's Highlands route. Indeed, it is ranked 9th in the highland's best courses and 51st in the country overall.

Richard took over the reins at the club whilst Derek worked towards his retirement at the end of March. He had been at the club for forty-nine years; a quite staggering commitment to one club. Mind you, at fifteen years service, Richard is a relative newcomer as his team includes Michael Mcinnes (42 years service), Graeme Robbins (38 Years) and Brian Tait (28 years), so he won't be short of experience to draw on in his new role.

Having progressed through the ranks, taking SVQ levels 2 and 3 in Sportsturf and an HNC in Golf Course Management at Elmwood College on the way, Richard is well qualified for his new role. Additionally, he has Pa1, Pa2 and Pa6 spraying certificates, first aid and automatic irrigation level 3.

The 18-hole, 6765 yards, par 72 course sits on a sandy loam soil close to the Moray Firth coastline. The greens are built out of the local soil. It is a mixture of links, heathland and parkland and, for this inexperienced links golfer, far too much gorse! That said, it was the perfect stepping stone between the inland beauty of the Boat and the true links of Spey Bay; you should have seen me at the latter - I was lucky to come fourth!

Presentation is paramount and Richard confirms that all his team are fully conversant with all day to day course maintenance requirements.

"Our cutting regimes are fairly standard," says Richard. "We keep the greens at 3.5mm in the summer, cutting every day. We also run the Tru-Turf iron over them three times a week. Tees are cut at 7mm twice a week and fairways once a week at 10mm. We pencil tine the greens every three weeks using the ProCore, topdress on a weekly basis in summer and overseed twice a year. We operate sustainable maintenance techniques and aim to keep fertiliser usage to a minimum."

This particular region of north-east Scotland has its own microclimate, but it's such a small area that the weather forecasts never highlight the difference, often tarring Scotland with a broad 'wind, rain and snow' brush. Whilst there can be ten inches of snow ten miles away, Nairn has none, or at least very little. "That said, the weather has generally become wetter in recent years," observes Richard, "which means it's harder to get enough topdressing down sometimes."

That said, Storm Abigail swept through in the middle of November, causing some damage, and the course had to be closed later in the month and into December when a sprinkling of snow lay on the ground and temperatures dropped to minus 2OC; still not cold by Scottish standards.

"We rarely need to use temporary greens, although I have put a 'reasons why' blog on the club's website which graphically shows the damage that can be caused by walking on frost covered greens (see below)."

"We find these blogs really useful to inform the membership about the work we are doing at any given time. For example, the bunker renovations we carried out through the winter, our reasons for aeration and even about the training courses and events that the greenkeeping team have attended. It all helps to raise our profile and educate the golfers." 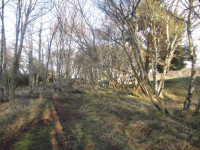 The club has an environmental policy in place and also work closely with the Golf Environment Organisation and Carolyn Hedley at Scottish Golf.

Richard's blog on the topic explains; "A golf course is a great place to encourage wildlife, during inclement spells of weather, the greenstaff have been recycling old and broken pallets to create bat and bird boxes specifically designed for different species."

"A log pile has also been created using timber from extensive woodland management works. Log piles can become an excellent home to saproxylic insects and various fungi and lichen species, as well as providing a home to small mammals."

"There are prime habitats such as linksland, woodland, heathland, grassland, small burns and a pond. These habitats form a substantial part of the course and it is these which will help the club offer something different for golfers to enjoy. A a thriving wildlife community that contributes to improved aesthetics, appearance and a better playing experience to our members and visitors alike."

"Our definition in relation to golf course development and management is: 'Optimising the playing quality of our golf course in harmony with the conservation of its natural environment under economically sound and socially responsible management'. But don't tell that to the rabbits - we operate a shoot to kill policy!"

During the winter, golfers are required to use golf protector mats. They are used for every shot up to the green, with the exception of a driver off the tee. Used correctly, they keep divots to almost zero through the winter, although some visitors apparently don't like to use them (I was not one of them).

An additional blog even explained a full irrigation check and the reasons why it was being carried out, with a strong emphasis on saving water. In addition, there is herring bone drainage on most fairways.

Asked what had changed in his fifteen years, he commented; "The industry has become much more professional, much more management orientated and health and safety conscious. We need to work more closely with the R&A, GCMA, GEO and suchlike. We need to raise our profile at every opportunity."

Clearly, Richard is going to slot into his new role very easily, such is his experience at the club and relationship with existing staff. 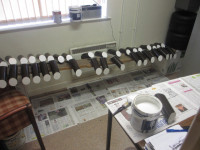 "We like Toro machinery here. They make quality machines. They are purchased on a 5-year replacement deal from the local dealer.

We do most of our day to day machinery maintenance in-house, but sharpening and full services are outsourced.

The Toro ProCore 648 and Tru-Turf roller/turf iron have been invaluable and have made a big difference to our greens.

We trial new machinery on a regular basis, just so we know what is out there.

Next on the target list is a Graden Sand Injector, Air 2G2 and a disc overseeder. As I control my own budget for course maintenance, who knows?"

"The picture above illustrates the actual footprint patterns of one foursome playing a hole like normal and shows its potential to cause a lot of damage to a frost covered green.

Whilst it may not appear to be much of an issue, consider that the number of footprints that may occur on any given hole by one foursome can exceed 300.

The proof generally comes 48-72 hours later as the plant leaves turn brown and die. The result is a thinning of the putting surface and a weakening of the plant. The greens, in turn, become more susceptible to disease and weeds."

Richard even provided a link to a Pitchcare article called "Winter Greens - Frosty the 'No' Man" to further inform the members.