by Steven Coney
in Football and Synthetics
on 27 Jan 2016

0 National League set to approve use of 3G pitches 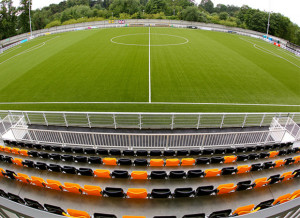 Artificial pitches are currently allowed below Step 1 with Maidstone United benefiting greatly after moving into their new Gallagher Stadium, which has a 3G playing surface.

And clubs in the National League will now be allowed to play on 3G surfaces after clubs voted in favour at the EGM held today. The move will have to be ratified by the Football Association and will only include certain grades of 3G pitch.

It is understood that a large contingent of League Two clubs are also keen to allow their use with artificial pitches currently banned in the Football League.

A National League statement read: "At the EGM of The National League held yesterday (Thursday) at Telford, amongst a raft of company related business, member clubs voted on a special resolution to amend Rule 24 which would incorporate a whole range of conditions and requirements in respect of playing surfaces, both grass and artificial.

"Members gave their consent to the submission of Rule 24 to the Football Association seeking formal approval of all elements contained therein. This is the formal route to be taken when seeking changes to rules.

"The purpose of seeking the consent of the member clubs on Rule 24 is to enable the amendment sought to be introduced in time for the 2016/17 season, thus allowing continuity for clubs already in membership and those seeking entry from Step3. (Isthmian, Northern and Southern Leagues) at the end of this current season.

"If all the elements around playing surfaces are approved, importantly it will permit the use of artificial surfaces to be included at Step 1 (National) in addition to those already permitted at Step2 (North and South).

"These amendments to rule will also clarify the standards acceptable for artificial surfaces, especially as terminology will change this year to only allow FIFIA QUALITY PRO surfaces for playing of fixtures at Steps 1 & 2. Such name change will nevertheless be in line with the previously set criteria of FIFA 2 Star category definition."

For the original article, visit www.thenonleaguefootballpaper.com.