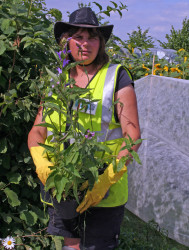 Over 2,000 native wild flower plants, (a mixture of pots and plugs) are contributing to 'Fields of Gold' a celebration of British Agriculture, which forms half of the RHS central exhibit at Hampton Court Flower Show.

Designed by Gillian Vandermeer, who farms in East Sussex, is deputy Chairman of the East Sussex NFU and was commissioned by the RHS in September last year, 'Fields of Gold', covering 1,250 sq metres depicts commercial farmland and carries the message that British farmers, as well as being primary food producers are also caring for the environment. "We're showing an apple orchard where the fruit is grown on a trellis system (rather than in the traditional manner) with wild flower pollination strips, ie wild flowers planted in between the rows to attract bees," Gillian explains. "Research carried out by international seed breeders, Syngenta, shows that the bumble bee does the work of 300 honey bees, and our native wild flowers are an important food source not only for them, but many other insects which in turn support thousands of species of British birds and wildlife."

Linda Laxton, MD of specialist Norfolk nursery British Wild Flower Plants (BWFPs) who has supplied the plants agrees. "The bumble bee feeds from very early spring, sometimes seen in February, and needs a supply of nectar plants throughout the year. While garden plants provide for the summer, it is the native wild flowers that form the life-line for these threatened insects. The Bumblebee is a key instrument in the pollination process. We need to do all we can to protect it by creating an environment in which it can thrive."

Meadow plants for Gillian's wild flower meadow margins such as Agrimony, Basil, Harebells, Sorrel, Teasel, White Camion and Clover were supplied by BWFPs in the spring and grown on, along with shade loving hedgerow species - Hedge Garlic, Ragged Robin, Betony, Germander Speedwell and Ground Ivy - to be under planted beneath Gillian's Sussex Chestnut fencing.

"What I really want this garden to do is inspire the general public to go home and plant native wild flowers in their gardens," Gillian concludes. "Nearly everybody has a space some where."