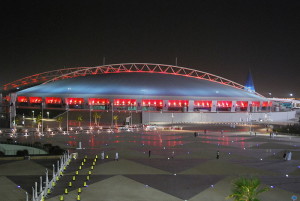 The World Cup Bid Evaluation report for Qatar contains a single sentence that is especially striking to a sports surface consultant like me; "All stadiums would have grass pitches".

Given that average daytime temperatures during the tournament are likely to be of the order of 35OC to 37OC, maintaining the quality of the grass pitches to the standard that FIFA, the players and, indeed, the rest of the world expects will prove to be a particular challenge for those responsible, even after the most innovative methods of cooling and shading have been employed throughout each stadium.

So, what are the challenges to be met? Extremely good artificial (i.e. non-grass) surfaces are available and are approved by FIFA for purposes elsewhere. These would, by definition, avoid the difficulties of maintaining healthy grass in these environments. However, FIFA's decision to use grass pitches has merit, not least because of the cooling effects of grass.

When it is growing, grass is continually emitting water vapour from its leaves which brings about a localised reduction in air temperature and an increase in humidity. In hot weather, sitting on a lawn is always a more pleasant experience than sitting on an artificial, non-living surface for this very reason. The world's finest football players will no doubt agree with this.

There is a fundamental difference between the types of grass that are used in very hot locations, like the Middle East, the southern USA etc., and those that are grown in cooler climates such as the UK and northern Europe. This is to do with the way in which the grasses use water and sunshine.

When the average daytime temperature of a locality is greater than around 23OC, so called warm season grasses are able to grow very quickly, and they can do this without using nearly so much water as 'cool season' grasses. This is because they have a very particular leaf structure and their biochemistry is different. Water is often a scarce resource, so warm season grasses are the usual choice for sports surfaces in these hot places. Up to a point, cool season grasses can grow in these hot temperatures as well, but they use an awful lot more water in order to do so.

Now, the cooling effects are likely to be greater from a cool season than from a warm season grass because a cool season grass puts out a greater volume of water vapour into the atmosphere. It could be argued, therefore, that if sufficient water could be delivered to the pitches to keep the grass healthy and not drought-stricken, a more pleasant environment in which to play football might actually be achieved using cool season grasses. This is a fairly radical possibility.

Heat, however, as opposed to drought, may itself limit the growth of some grasses and, in this respect, the cool season grasses are likely to be more susceptible since they have evolved in climates much cooler than that of Qatar. Most of the warm season grasses, by contrast, evolved in central Africa.

But, just as underground heating systems are widely employed in stadium pitches throughout northern Europe and Scandinavia, it would presumably be possible to incorporate cooling systems into pitches to operate in a similar, reverse, manner. Indeed, this technology already exists in the form of ground source heat pumps which take heat out of the ground and transfer it to nearby buildings. This approach could very well help to achieve more optimal ground temperatures for either warm or cool season grasses.

One way or another, the Qatar pitches are going to have to accommodate substantial volumes of water being applied to them in order to meet the needs of the grass. That water cannot be allowed to affect adversely the playing quality of the surfaces. This suggests that an extremely free-draining rootzone (the material that the grass actually grows in) is utilised, and this generally means that the dominant component should be a relatively coarse and very uniform sand. The downside of this is that such rootzones are not able to retain very large volumes of water with which to sustain the grass.

Fortunately, the principle of the suspended water table may come into effect here. If you place a finer textured material, such as sand, directly over a coarse material, such as gravel, water in the sand will accumulate to a certain point before it eventually drops out into the gravel. The sand can, however, be made to hold a greater quantity of water over gravel than if it were simply located on a greater depth of more sand. The amount of water the sand can hold before it starts to drain into the gravel is determined by the particle sizes of both the gravel and the sand, but these are features that can be established before you build the pitch.

This would mean that, provided the depth of rootzone was sufficient, and using this principle of the suspended water table, it should be possible to limit the frequency with which irrigation needs to be applied to the pitches.

Water will, nevertheless, need to be re-supplied periodically through the irrigation system and this will be in relatively large doses on each occasion. This may mean that some water will drain out of the bottom of the pitch construction. This need not be wasted, however, because one would simply connect the drainage water to the irrigation supply.

There is a risk with this recycling of greater salt levels developing in the water, but this could be monitored relatively easily. Indeed, some grass species and varieties can be chosen for their greater tolerance of salt, which would achieve a further level of control and which may be necessary anyway if the water quality is an issue in Qatar.

The regular application of relatively large volumes of water also presents the possibility of bringing about further cooling of the pitch.

Evaporation from the surface will achieve this, to some extent, but the deliberate chilling of the water prior to its application would provide a very effective means of cooling the rootzone as a whole, the more so if a greater volume of water were to be used for the reasons described above. 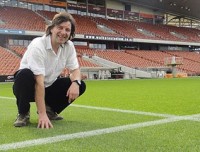 There are few precedents for the circumstances in Qatar. What I have presented here are just some ideas, bringing together the theory and practice of football pitch construction in order to solve the very particular challenges that will face those responsible for these pitches.

Nothing is impossible but, were I to develop the construction specifications, I would wish to undertake a certain amount of research and investigation, in particular into the areas discussed in this article, beforehand. When the problems are eventually surmounted, it will represent a very significant achievement and will fly the flag for the continuance of natural turf as a playing surface throughout the world.