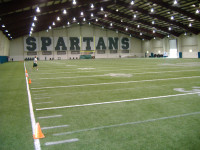 Sports play a huge part of many peoples lives. Regular television coverage from the world's top sporting venues is fuelling a desire for the aesthetically perfect turf, be it sports pitches, golf greens, or even gardens.

However, in reality such perfection is often very difficult to accomplish. With the wear and tear of time, current recreational facilities are commonly found to be inadequate to accommodate its current demands. Many facilities may need upgrading and the choice of natural versus synthetic turfgrass has become a highly debated issue in recent years.

Artificial turf is basically a grass-like playing surface manufactured from synthetic materials. Artificial turf has been used for many years mainly beginning in the 1960's when AstroTurf was installed in Texas. In the 1970's artificial turf became more commonly used, particularly on sports pitches in the USA.

Synthetic turfgrass was slower to be used in Europe with some installations in the 1980's. However, much of the synthetic turfgrass that was used up to this time, had an unforgiving surface with many players suffering from problems such as carpet burns and muscle injuries. This forced some turfgrass managers to remove areas with synthetic turf and to switch back to natural turfgrass systems.

In the last decade, many advances have been made in relation to the playability of synthetic turfgrass systems. Producers have focused on making the synthetic turf as grass-like as possible, while consequently reducing athlete injuries.

Today's synthetic turf surfaces are often virtually indistinguishable from natural grass when viewed from a distance, and come in many shades of green depending on the situation. Many modern systems use fibres which are coated in silicone and stitched into plastic mats. Sand and rubber crumb are filled between the fibres to act as a layer between the plastic mat and the player and also to maintain the fibres in a more upright position. 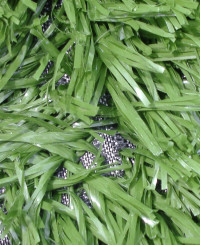 The introduction of rubber crumb as a component of artificial systems has been a vital constituent to the success of modern synthetic system since it acts as a shock absorber and enhances fibre stance.

There are several distinct advantages to using synthetic turf, including:
· Higher availability for use
· Environmental friendliness
· Useful under reduced light areas
· Aesthetic perfection

Probably the most important component of synthetic turfgrass is the ability to withstand constant use without the all too common "wear out" as experienced on natural grassed areas, particularly on sports pitches. This is of particular importance to games which are practiced over winter months. It is all too common, to pass by sports pitches and to see large bare muddy areas throughout the playing surface.

Many environmental benefits result from replacing turf grass with synthetic turf. Artificial turf requires no fertiliser or pesticides. We live in an era when water quality is of great concern to the majority of people.

Over recent decades, a lot of fear has been expressed regarding leaching of applied chemicals from grassed areas including golf greens, sports pitches and home lawns into water ways, with issues such as eutrophication and public health risks having been expressed. Coupled with this, synthetic turfgrass is often composed of recycled materials which reduces waste going to landfills. Artificial turf requires no mowing which is a very labour intensive constituent of grass management.

Inadequate light levels for vigorous turf growth is the key challenge associated with growing turf on shaded golf greens and in many stadiums. The light levels of closed stadiums are too low to maintain healthy plant growth that can recover from player damage.

So many golf courses that I have visited have at least one problem green with poor patchy grass growth, mainly due to inadequate light penetrating the green due to shade cast by surrounding trees. Artificial turf has thus been used in many sports stadiums and even golf greens to try to overcome the low light issue.

The concept of using artificial golf greens is relatively new in the Europe, but has been commonly used throughout the USA for the past decade. From my experience, artificial turfgrass has become very popular with regular home owners who want a practice green in their backyard. Many artificial turfgrass manufacturers stress the ease of installation of their product on golf greens and claim that the artificial surface gives a true bounce and roll.

Some may feel that aesthetics rather than field performance is the driving mechanism towards the growing popularity of synthetic turf. Synthetic turf unlike natural grass does not suffer from drought, weeds or diseases and comes in various shades to suit many tastes. Recently the concept of laying synthetic turf in road margins and even on home lawns has started to gain momentum. Some home owners view synthetic turf as the magic solution to a perfect lawn with minimal care.

The question over athlete injury from synthetic surfaces is still highly debated. In the past, many felt that artificial surfaces were "unforgiving" and caused many injuries to players. This issue raised a lot of concerns from managers, players and fans alike. However, it is claimed that this situation has changed in recent years with the introduction of newer manufacturing procedures. Some studies have shown that new artificial surfaces are showing far lower injury rates than in the past.

Among the main problems that have been raised from synthetic turf use are increases in surface heat compared to natural turf and growth of bacteria on the synthetic surface. It has been documented that surface temperatures can be well above that of natural turf in warm weather, with some experts recommending keeping off synthetic grass areas during the middle of warm days. Natural grass systems are a living network of microorganisms which work to take care of pitch sanitation and degrade body fluids such as sweat, blood etc. Artificial turfgrass systems are breeding grounds for bacteria and require sanitation on a regular basis.

People may argue that synthetic surfaces cost less to maintain compared to natural systems and are ready for play on almost every day of the year. However, in my opinion natural grass systems are often installed with very low budgets, frequently with clay rootzones and are granted miniscule maintenance and management budgets. It is hardly surprising that these surfaces do not stand up to constant wear and tear. In my experience, many people do not sit down and properly look at natural versus synthetic systems. Installation costs of synthetic grass systems is well above that of soil based rootzones with natural grass.

I realize that once the synthetic surface is in that there is relatively little maintenance required, however, if natural grass systems were given adequate management budgets in the first place, then I feel that many poorly performing sports pitches would be in a far better position right now. Coupled with this is the fact that synthetic systems need replacement after about ten years. In saying that, it is difficult to say for certain that a synthetic material will not be worn out in under ten years. Installing a well designed sand based rootzone with natural grass may be expensive at the outset, yet I think that it will handsomely benefit the sports club or organization on the long run.

In some situations, synthetic turf systems may be useful:

· Where indoor training fields with surfaces similar to grass are required
· Areas where the playing surface is being used constantly on a daily basis regardless of weather conditions
· Stadiums with limited natural light available, hosting games, concerts and events on a regular basis.

It is important to remember that a sports field showing some wear during or at the end of the season is natural. The decision to be made is whether or not this wear is actually negatively impacting upon the game being played.

One of the most critical issues to decide on is in determining maintenance conditions. It is very important that clearly defined conditions for post-installation maintenance and testing be agreed. More long term research is required to study the impact of artificial surfaces on playability and player performance if we are to ever truly understand the full potential of artificial turfgrass.

Tim Butler is currently studying for a doctorate degree in Sportsturf Science at both University College Dublin, Ireland, and Michigan State University, USA. Contact Tim for more information at timmbutler@hotmail.com