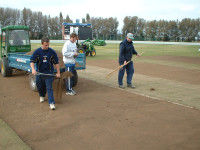 Neil Godrich has been Head Groundsman at Derbyshire County Cricket Club since 2000, when he became the youngest person to hold such a major title at the age of 22.

Now 29, Neil - with a team of three - has won three ECB commendations for the pitch and he puts most of the success down to the use of Boughton's County Loam. Fourteen pitches on the main cricket square were lifted and replaced with County Loam in 2002. Eight went down by four inches and the other six by two inches. Twelve pitches on the practice square had been replaced with the same loam in 2000.

"We generally find the pitches dry out a lot better during the build-up to games and produce good pace and bounce," says Neil. "Boughton did a marvellous job. They took off the main square with a Koro Field Topmaker and we replaced that with 100 tonnes of their County Loam over a period of two weeks." 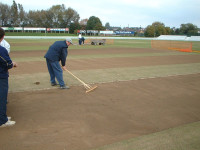 "They did the complete job on the practice square, replacing the top nine inches with 120 tonnes of loam. We've been topdressing with the loam and cross rolling to get rid of the wave effect that we had at one time."

In 2005 Boughton re-levelled the outfield at the County Ground. "We're delighted with all the work that Boughton have done over the years. They are always on the end of a phone when I need any advice and will pop in at the drop of a hat if I have a problem."

Neil went to work at Derby straight from school after doing work experience with the then Head Groundsman Steve Birks, who went to Trent Bridge in 1997. Neil was then assistant to Barry Marsh who retired in 2000, when Neil took over. "The soil in the outfields is generally sandy and gravelly," says Neil. "Up until 2002, the main square wickets had only been topdressed with Surrey Loam over old racecourse soil which had been in place since 1970. We're delighted with the way all the wickets are playing now."