The Liberty Stadium opened in 2005 to provide a home to Swansea City AFC and Ospreys Rugby. Built on the site of the former Morfa Athletics Stadium and playing fields, the 20,520 seat stadium has become one of the foremost sporting venues in Wales.

Figure 1. The Liberty Stadium in Swansea, picture taken on the 11th of February 2012.

Dan Duffy, the Head Groundsman, has been working at the stadium since it was constructed. Dan has been aware of the threat to his turf from plant parasitic nematodes and has taken steps to monitor their population. Dan has built up a database of sample results from Dr Colin Fleming the Principal Scientific Officer, Applied Plant Science Division of Queens University, Belfast and from Dr Kate Entwistle of the Turf Disease centre. This may lead to waste of precious fresh water resources, increase the risk of groundwater contamination with nitrates (Luc and Crow, 2004), and necessitate increased fungicide use by creating conditions ideal to outbreaks of fungal diseases (Smiley et al., 1992). Of even greater direct concern to turfgrass managers, the turf may become chlorotic, wilt, thin out, and die (figure 2).

Figure 2. Nematode damage on golf green on a Midlands course.

Nematodes are considered to be a major plant problem for football pitches golf courses and that have been severely affected throughout the British Isles (Fleming et al., 2008).

Nematodes became an evident problem at the Liberty Stadium in spring of 2009.

Regular analysis enabled Dan to keep track of building populations of individual species. Two particular species - Meloidogyne (root-knot) and Hemicycliophora (sheath) nematodes became a significant problem as can be seen by the visible symptoms of chlorosis in figure 3.

Figure 3. Nematode damage evident on the pitch at the Liberty Stadium, Swansea (March 2007).

The data allows us to see the increase in plant-parasitic nematodes over the growing season (figures 4 and 5). These species are controlled by the application of Nemaclear and bought within the damage threshold to prevent them being a problem. Dan acknowledged that the use of Nemaclear inadvertently affects the population of beneficial Bacteria and Fungi but states that by using biostimulants such as carbohydrates and seaweeds it is possible to bring back the populations of the beneficial organisms whilst retaining control of the plant-parasitic nematodes (figure 6).

Figure 6. The numbers of beneficial Bacteria and Fungi over a two year period.

Dan Duffy has been working with Dean Gilasbey (figure 7) of Arcis Biotechnology, the producers of Nemaclear, to help him control his problem with nematodes. With Dean's advise Dan was able to target the applications of Nemaclear to obtain the maximum benefit from the product, i.e. spray when the juveniles were prevalent outside the plant. Dan states that Nemaclear is the only product that has enabled him to keep nematodes consistently under their damage thresholds. 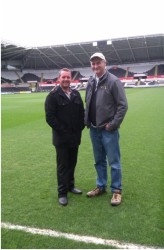 Similar to many users of Nemaclear Dan has also experienced a reduction in the need for fungicides, it is likely that the health of the turf has been increased and the plant is less susceptible to disease and infection but this is of significant benefit in helping to reduce costs of materials and resources.

With the use of Nemaclear, nematodes are under control at the Liberty stadium and the turf goes from strength to strength. Dan will continue to take samples to ensure that he applies the appropriate management technique as and when it is required but he's confident that his nematode problem is under control.

Nemaclear is available in the Pitchcare shop