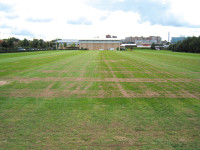 Is there a reason why nematodes are increasing and, therefore, our pitches are under the continual threat of infection and damage?