by Dr Kate Entwistle
in Consultancy
on 10 Apr 2006 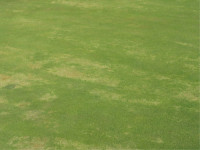 Nematodes are a large and diverse group of non-segmented, microscopic roundworms that can inhabit both the rootzone and the turfgrass plants themselves. There are three main types of nematode but it is only the plant parasitic nematodes that have the ability to cause damage or disease to the turf.

All plant parasitic nematodes possess some form of stylet or hollow feeding organ in their mouth that is similar to the stylet used by greenfly to pierce herbaceous plants. The nematodes push this stylet in to the plant cells, inject chemicals to assist their feeding and remove nutrients and water from the turfgrass plant. Depending on their type, nematodes feed either on or in the roots, stem or leaf of the plant but it is generally those that feed on or in the roots that can cause the most damage to close-mown turf.

For many years it was believed that plant parasitic nematodes only caused damage to warm-season turfgrasses but over the past 6 years, I have seen a steady increase in the number of amenity sites across the UK and Ireland that have been affected by nematodes at some time during the year. Damage appears to be most prevalent on stadia pitches, golf courses and racecourses though all amenity grasses have the potential to become affected.

The symptoms that develop on the sward will vary depending on the nematode population present but generally, damage is first seen as chlorosis of the plant and reduced turf vigour. The turf generally doesn't respond well to application of either nutrition or irrigation and the damage often progresses to a yellowed sward in discrete- or diffuse-edged patches.

Affected areas will tend to show up at the same time each year as rootzone temperatures increases and activity of the nematodes increases.

Symptoms can often resemble those of fungal disease but fungicide applications fail to produce any recovery. In areas affected by nematode damage, foliar application of nutrients can offer some recovery from the symptoms, allowing the plants to bypass the roots and take in nutrients through the leaf. If the plants can continue to develop new roots to compensate for those damaged by the feeding nematodes, the symptoms will not become as sever and recovery will be quicker.

Nematode populations will vary through the year following almost a cyclical pattern and if high populations coincide with severe physical or nutritional stress of the turf, extensive damage can occur.

It will be possible to find plant parasitic nematodes in most rootzones and on areas where the turf appears quite healthy. As with fungal disease, it is not merely the presence of the nematode that is the problem but the population size and the general health of the turf.

Although we have recently identified a completely new species of nematode that is causing damage to bentgrass turf, it is believed that all of the nematode damage seen in the UK and Ireland is being caused by native species that have developed to damaging population levels as a result of the sward composition and / or the inherent stress that comes with producing quality playing surfaces.

If you think that you may have a problem with nematodes affecting your turf, look for shallow root growth or a deformity in the root development (swellings, excessive branching, stunted or stubby growth). You will not be able to see the nematodes without the use of a microscope but if you send a sample through, I can check it for you.