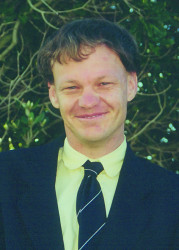 Nematodes remain a major challenge for many bowling greenkeepers. In the last 10 - 15 years, research and field observations have provided a variety of options for controlling, or in most instances suppressing, nematodes on bowling greens. A summary of these options is presented.

Dagger nematodes (although best observed with a hand lens) are visible, occurring as opaque 'hair-like strands' attached to the plants root system or present within the soil mass. Relative to other nematode species, Dagger nematodes are long living, lasting 1-3 years and have a comparatively slow reproduction rate, which in NZ, is generally considered to be one generation per year.

Photo 1: Nematode alongside root at 100x magnification. The nematode is actually only 1mm long. 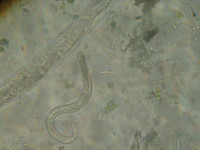 When considering the damage caused by nematodes, it is important to appreciate that nematodes rarely kill the plant. Instead, as a result of their feeding activity, the plant root system is severely damaged, limiting water and nutrient uptake. Consequently the loss of turf cover that typically occurs with an attack is the result of:

Once damage is observed, which typically occurs from November onwards, it is often too late to change management practises, with the plant having already suffered serious damage to the root system.

For those clubs that have a history of nematodes, it is desirable to commence a sampling programme from August onwards. This involves taking 50mm soil samples from the edge of historically occurring nematode-affected areas and considering the health and depth of the root system.

Nematodes require a moisture retentive soil, enabling them to 'swim' between soil aggregates and are, in the main, more severe where root development is restricted.

Consequently nematode activity or damage is generally more severe on those greens that:
· are constructed from a heavy soil type (clay, silty) or have poor drainage, and
· older greens which have developed a significant thatch layer.

Improving the root zone is an important step in nematode damage control, as most of the plants used on bowling greens, lack a fibrous or branching type root system and once the root tip is damaged, functioning of the root system is severely limited.
Management practises should target:

i. Improving soil structure using renovation treatments such as the vertidrain, Hydroject, spiking etc. Depending on the impact of these treatments on the surface, they should be scheduled during April-June and August-November, when most new root development occurs.

ii. Reducing thatch by either:
· physically removing with grooving or similar and concentrating on working fresh soil into rather than on top of the existing thatch layer, or
· where significant thatch problems occur, resurfacing the green.

Note: Resurfacing the green does not make the nematodes go away. Nematode damage typically reoccurs in the same patches after resurfacing.

iii. Identify and address the cause of poor drainage.

Once nematode damage occurs, there are two key objectives that the fertiliser programme should seek to address, namely:

i. During autumn and/or spring when conditions are favourable for root development, using an N-P type fertiliser that contains a soluble phosphorous source such as Di ammonium phosphate or Mono ammonium phosphate, to stimulate recovery of the root system.

This can be combined with narrow bit/tyne aeration (⅜ drills or needle tyning) and backfilling effected patches with a 10 part soil 1 part blood and bone mixture.

ii. During the playing season applying as required, a soluble fertiliser at light rates (approximately every 2-3 weeks) to maintain plant vigour and hence help recovery from play.

For best results:
· Do not irrigate or mow for at least 24 hrs after application.
· Avoid being too generous with the fertiliser, which can compromise playing quality or encourage disease.

Once damage occurs, irrigation practises need to change in order to achieve the following goals:

i. To maintain moisture to slightly below your effective rooting depth
The shallower root system that occurs as a result of nematode activity will typically require less water being applied at any given watering and that watering is carried out more frequently. Care is required to avoid heavy watering which will result in saturated soil conditions below the root system and hence limit recovery when conditions are more favourable.

ii. Managing heat stress
The plant's inability to take up moisture during hot weather makes it more susceptible to the effects of heat stress. Syringing (1-2 rotations of the sprinklers) as required during the day will manage this problem.

There are a variety of 'natural options' available for use in either suppressing nematodes and/or encouraging a stronger plant. The level of improvement is likely to be variable and probably will not prevent the use of a nematacide programme. The main options presently used on bowling greens and their action are summarised in Table 1.

The programme adopted is product- dependent and will typically require;
· frequent applications (approximately monthly) during spring - autumn
· commencement prior to either damage occurring and or the nematodes becoming active i.e. North Island; August-September and South Island; September-October onwards


Plant "teas" (Garlic, marigold, rhubarb)
Plant "teas" are made by soaking the likes of Garlic, Marigold or Rhubarb in water for 2-3 weeks and applying the resulting "tea" to the green before washing into the profile.


Seaweed
Although there is evidence that some seaweed species (products) can act directly on nematodes, their main benefits is the presence of growth regulators and a fertilising effect, thereby assisting in the recovery of the plant and its root system.


Sugar/molasses
Regular applications of these products when the nematodes (particularly Dagger nematodes) are active, is reported to act on and reduce the nematode population. These products also act as a food source for other soil life.

The soil is a complex mixture of micro organisms, some of which are damaging to parasitic nematodes. Creating a more favourable growing environment can encourage these beneficial organisms and assist in suppressing nematodes.

The main nematacides used on NZ bowling greens are:


Regrettably the chemical control of nematodes is unreliable and often provides little more than suppression of the nematode problem for 1or 2 seasons. The main reasons for this include:

· Adsorption.This is the process whereby the nematacide is in effect bound onto the thatch (a significant problem on many bowling greens) rendering the chemical inactive.
· Nematacide action. Unlike most insecticides, nematacides do not kill the nematode but rather prevent them from feeding. Unless the nematacide persists within the soil for sufficient time, the nematode can recover and re-commence feeding.
· Application technique can result in the nematacide either by-passing the affected zone via core holes etc, or not reaching the affected area.
· Reproduction rate. Substantial "kills" (90%+)are required to counter the reproduction rate and prevent the nematode population increasing.

For best results when applying nematacides:

i. Open up the surface to the depth (i.e. approximately 50-60mm) where nematodes are active. Anecdotal evidence indicates that injecting the nematacide with the Hydroject can provide an improved level of control.
ii. Schedule spraying when soil temperatures are warm (>14-150C).
iii. Schedule spraying in late spring - early summer, before serious damage occurs and consider an autumn application to encourage recovery.
iv. Water the products in with 10 -12mm of water. This should be applied as several short cycles that prevent ponding of water.
v. In serious outbreaks several nematacide applications may be required at 3-4 week intervals to extend the period that the nematodes cannot feed.
vi. Finally these products are extremely toxic and appropriate protection for the greenkeeper, bowlers and environment should be observed.