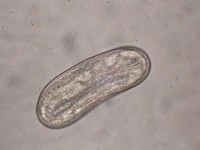 With the appearance of arctic-like conditions, a number of greenkeepers and groundsmen have been asking if freezing weather in the UK will have a beneficial effect by reducing the levels of insect and nematode pests attacking turfgrass? To answer this question we need to understand the effects of low temperatures on soil invertebrates.

Generally, animal and plant species can only survive within a specific range of temperatures. For example, tropical pests can endure much higher temperatures than pests found in the British Isles, but they will be quickly killed by UK winter conditions.

As temperatures drop, invertebrate activity decreases and natural physiological/biochemical processes start to slow down. If temperatures continue to fall, the animal will cease all activity and eventually die.

Our native species are often exposed to, and therefore must be able to survive, at least short periods of sub-zero temperatures. Extreme low temperatures kill animals by freezing their cell contents and body water, and it is usually the formation of ice crystals inside an animal that will irrevocably damage its cells and body structures, eventually leading to death. In most cases, the longer lasting and more severe the frost, the greater the number of soil invertebrates that will die.

Many invertebrate species adopt the strategy of producing large numbers of offspring, which means that, even if most are killed by extreme weather conditions, small numbers may survive to establish a new population.

Low temperature survival mechanisms are also common in invertebrates. Notably, free-living Antarctic nematodes are able to survive total freezing for most of the year and only become active during the short summer period, feeding in the patches of moss and algae that grow in summer melt-water.

The ability of plant parasitic nematodes to survive extreme winter conditions is evident in regions such as North America and Scandinavia, where nematode damage is apparent on golf courses despite exposure to long periods of freezing conditions.

Invertebrates such as nematodes use two main approaches to survive extreme low temperatures.

Freezing avoidance - animals prevent ice formation by removing water (dessicating), overwintering in dry sites or by resting in a cocoon or egg. They may also actively remove or inactivate potential ice nucleating substances or accumulate natural antifreeze (e.g. glycerol or sugars) within their bodies. Some animals are also known to produce special proteins which inhibit the growth of ice crystals inside their cells. 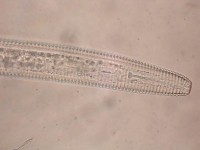 Most of our knowledge on the effects of freezing on invertebrate pests involves insects which use both tolerance and avoidance mechanisms to survive winter conditions.

Nematodes are aquatic organisms and, being in contact with water, are, therefore, much more susceptible to inoculative freezing (freezing in the soil water travels across the nematode body wall and 'seeds' ice formation inside the worm). This suggests that nematodes are more likely to use freezing tolerance mechanisms to survive the ice.

This appears to be the case with plant parasitic nematodes such as the stem nematode Ditylenchus and the foliar nematode Aphelenchoides. Freeze survival rates of juvenile Ditylenchus, are similar, whether or not the worms are in contact with water, and observations have confirmed that they are tolerant of cellular freezing.

Some plant parasitic nematodes, such as cyst nematodes, overwinter in eggs which are further protected by the body wall of the female nematode (the cyst). Juvenile worms inside these eggs are desiccated and ice formation is restricted by both the cyst wall and egg shell.

It has been shown that, in some cyst nematode species, while hatched juveniles are quickly killed by ice formation, the eggshell can prevent inoculative freezing, allowing the unhatched worms to survive temperatures as low as -38OC. It is not known how widespread this protective mechanism is among plant parasitic nematodes, but it is likely that many species of nematode overwintering in eggs will be protected from freezing temperatures. 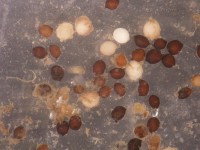 Another factor which may effect the survival rates of nematodes in freezing soil is the speed at which cold conditions appear. Root knot nematode juveniles show enhanced survival of sub-zero temperatures if they have been acclimatised to low temperatures before the onset of freezing. The slow onset of cold temperatures may allow the nematodes to "switch-on" protective mechanisms, while rapid freezing leaves the nematodes unprepared, resulting in much higher death rates.

Many nematodes have the ability to move in soil, and some species will be able to avoid freezing problems if they have migrated to, and inhabit, the deeper, warmer layers of a rootzone.

Conversely, nematodes exposed to freezing nearer the surface will experience higher levels of mortality. This also introduces a specific problem for sports fields which use under-soil heating systems. Here the nematodes will thrive in summer-like soil temperatures throughout the winter and population levels can continue to build up despite the cold weather. This may explain why some of the highest levels of plant parasitic nematodes are found in elite sports pitches with a high level of frost protection.

Putting all this information together suggests that significant numbers of insects and nematodes in our frozen greens and pitches will not have survived the big freeze. However, many pests, particularly those overwintering in eggs or cocoons, will be ready to hatch and start feeding as soon as soil temperatures rise in the spring. The actual severity of the winter mortality will only be apparent when we start to sample our turfgrass in the spring, and should we get a warm spring and summer, populations could soon be back at damaging levels.