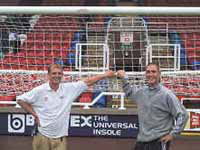 We have a large area to look after at Nene Park with the Stadium pitch, two training pitches, soccer school pitch, 5 aside area, artificial court, lawns, riverbanks, shrubs, hedges, plus block paved car parks that need to be kept weed free and tidy.

We have a full time team of four plus one part time. I have been here three and a half years now, working previously at Northants CCC and Overstone Park GC. My assistant is James Buttar 21, Mark Panter 16 taken from school, Martin Mayes 27, landscaper and last but certainly not last Peter "Sam" Presland 69, who comes in part time.

Our stadium pitch is a Fibresand 80/20 sand/soil mix construction and up to 28 Jan 02 has held up fairly well. It is thinning out a little in the usual areas - goalmouths, the middle and especially the south west corner. Our pitch plays host to the first team plus many reserve and youth games.

DIARY OF THE WEEK…

After a very wet weekend there was plenty of work to carry out on the training pitches yesterday but today my attention turned to the Stadium pitch because we are hosting a Division 3 match against Macclesfield. We had Pro cored the pitch last week and left it open and I decided to tackle these three games in a week before I open the pitch again. I believe aeration is important but I try to be careful to strike a balance so I do not de-stabilise the pitch.

At 11 o'clock I cut the pitch goal to goal in large bays. This bedded the pitch down well, tidied the sward up and still left the holes slightly open. James followed behind stringing and lining the pitch out -then we put the nets down and flags out. I was satisfied with the condition of the pitch after a lean spell earlier this month.

We watched the match which Diamonds won 2-0, put the nets up, flags away and spent a while at the end walking the bays putting the larger divots back- overall I was quite satisfied with the pitch tonight and went home at 10-30.

We all walked the pitch this morning up and down the bays repairing all the divots, scars, raked the goalmouths and touchlines. After this James took our Westwood ride on over the pitch side to side in bays and swept/brushed the pitch. This machine does a wonderful job of picking up all the debris to stop thatch build up and sweeps the sward clean. Finished the day working on the training pitches.

Left stadium pitch alone today and the rain was standing the sward up a treat, spent rest of the day on training pitches.

At last February is here, to me November and February are the key months in the football season. By November you know how the pitch is 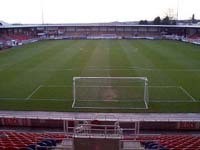 The weather forecast was not promising - rain later today, tonight and tomorrow morning so I decided to carry out pitch preparation this morning. I ran the mower over the pitch goal to goal in bays and James followed behind with the line marker. Once these tasks were carried out we concentrated on the training pitches and made sure the car parks were tidy.

With the rain and wind forecast I am hopeful by the morning the grass will have stood up and provide more cushion between stud and surface in the thinner areas.

Nice weather this morning - howling wind and rain. Pitch looked ok, the grass had stood up with the overnight rain and there was no lying water on the pitch. A fairly average game against Darlington ended with a 2-1 win, the highlight of the game being one of the floodlights catching fire and plunging one corner into darkness. Thankfully the fire brigade sorted the problem and the ref finished the match.

At the end of the match we walked up and down the bays repairing the divots before the heavens opened and clattered down.

After a drizzly Sunday the grass had stood up well. James swept the debris up on the Westwood whilst the rest of the team and I repaired any other damage left over from Saturday.

Also the troublesome floodlight got lowered onto the pitch to be repaired.

It was dry first thing this morning so I ran the mower over the pitch goal to goal. Strung and lined out pitch, nets down flags out -then the rain came so I was relieved to have these tasks out of the way.

In a competitive game Diamonds beat Oxford 2-1 with a late free kick. There were a few scrapes and divots including a real corker in the south west corner but over the three games I was quite pleased with how the pitch performed. We have 10 days until the next fixture I plan to aerate and give the pitch a light feed. It was a good week for the club - 9 points from the three games and entering into a play off position before the long trip to Hull.

I enjoy reading the articles on this web site and I find all the information interesting and informative and believe the site will go from strength to strength.

Touching briefly on a past article by Steve Patrick at Blackburn Rovers FC about the pre match warm ups - what a nightmare! In fact I am considering marking out a hop scotch court, they are unbelievable and do cause some serious damage - I now have three goalmouths along the West End bye line. I also find those tight circles that I believe Steve McClaren introduced a couple of years ago quite an annoyance and damaging. I feel a fifteen minute light warm up for both teams between 2.30-2.45 would be quite ample as opposed to 2 until 3.

Good luck with the site and I am looking forward to the first signs of recovery and a nice long summer.