0 Nettles and other weeds - Not as bad as you think!

John O'Gaunt greenkeeper and ecologist, Steve Thompson, looks at the benefits that nettles and other 'weeds' bring to the golf course. In this article, he explains how some of the more 'nuisance' species can, in fact, be of huge benefit to all manner of wildlife, both large and small

There has been an emphasis in recent years to bring beauty and improved biodiversity to the golf course in the form of newly created wildflower areas.

Areas on the golf course are prepared and seed sown in autumn or in spring and, by the summer, there is a mass of colour and nectar rich plants for our bees and other pollinating insects, such as butterflies. This can only be a good thing as we, as greenkeepers, try to halt the decline of our pollinating friends.

But there is a whole family of plants that probably pass by completely unnoticed that are just as important for our insects and other animals creating valuable wildlife habitats. These plants are most commonly known as 'weeds'! 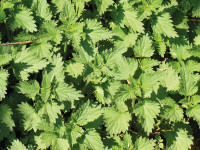 The distant cries of course managers up and down the country can be heard instructing their staff to strim those nettles, cut down those thistles or get rid of that bramble, but it doesn't have to be like that. Whilst some areas need to be kept tidy, perhaps close to a green or tee, other maybe out of play areas could be set aside for these plants to flourish.

The stinging nettle is probably one of the most numerous weeds on a golf course, enjoying soils that are rich in phosphates. It can be seen growing in woodlands, rough areas and along hedgerows and anywhere else it can get a foothold. It is a stubborn plant to remove and can appear unsightly, but it is a vitally important food plant for the caterpillars of many of the UK's declining butterfly species. Red Admiral, Small Tortoiseshell, Peacock, Comma and Painted Lady all rely on the stinging nettle as part of their breeding cycle. Nettles are not only useful for insects, but can also be a food source for humans in the form of nettle soup; go to this link for a recipe you might want to try - https://www.rivercottage.net/recipes/nettle-soup

Garlic Mustard is a biennial flowering plant in the Mustard family (Brassicaceae). It looks similar to the stinging nettle, but without the sting, and has white flowers. The leaves and stems smell like garlic when crushed. It likes shady places, such as hedgerows and the edge of woodlands. It is a food plant for the caterpillars of the Orange Tip (one of the first butterflies to emerge in early spring) and Small White.

As long as you don't keep horses or other grazing animals on the course, you perhaps won't need to remove all the ragwort. Ragwort has bright yellow daisy like flowers and is usually found in dry open places. It is an important food source for around thirty species of invertebrates, including butterflies and moths. It is particularly important as it is the sole food plant of the Cinnabar Moth; other moths that use it include the Ruby Tiger Moth, Goldenrod Pug Moth and the Sussex Emerald Moth.

If you hear the faint sound of "ouch, that hurt" or similar out on the course, then it could be someone getting attacked by thorns whilst clearing bramble. This can be an extremely invasive plant, with long trailing stems and hooked thorns enabling it to scramble over anything. It can often completely overtake some areas and has to be controlled. It thrives in most soils and light conditions. It sounds like a nightmare, but bramble does have its uses as it provides a home for a lot of different animals. The flowers (May to September) provide a good source of nectar for many pollinating insects such as bees, wasps and butterflies, whilst spiders spin webs to catch insects.

Moths, such as Buff Arches and Peach Blossom, lay their eggs on bramble as it is the food plant of their caterpillar. Various animals, such as blackbirds robins, foxes and small mammals, eat the fruits (August to October). It also provides a protective home from predators for many species of birds and small mammals. It is probably one of the most wildlife friendly weeds on the golf course.

Grass is probably the most common plant on the golf course, covering most of the course, but grass too can be a weed, especially if you get the wrong species growing on a green or tee. Yorkshire Fog can be a particular problem for golf greens and has to be controlled in that scenario but, like other grasses, if it is allowed to grow then it provides a food source for several species of butterfly, such as Speckled Wood and Small Skipper.

Allowing areas of rough grass to grow long might be annoying to some golfers if they lose their ball, but it provides a valuable home for insects, small mammals and, in turn, a food source for birds such as the Spotted Flycatcher and Barn Owl.

One last rather prickly weed to mention is the thistle. There are numerous species of thistle, but two in particular can be a problem in a grassland habitat; the Creeping Thistle and Spear Thistle. Thistles are often considered unsightly and the first thought is just to cut them down, but think again; even thistles are good for wildlife. Birds like the Goldfinch and Siskin will feed on the seeds, the caterpillars of the Painted Lady Butterfly use them as their foodplant and the Peacock, Meadow Brown and White Letter Hairstreak use the nectar from the flowers. Bees and other pollinating insects can also be found feeding on thistles.

So, when you're thinking about providing a wildlife habitat on the golf course, pause for a moment and give some thought to weeds. They're not as bad as you think.