0 Neville Jackson, who is from Wells, did the majority of his work in his home town. 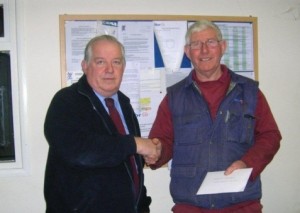 A groundsman who has retired after looking after school playing fields in Norfolk for 46 years has been praised for his hard work and conscientiousness.

Neville Jackson, who is from Wells, did the majority of his work in his home town.

Working from a depot in Syderstone he went on to work at schools in other places around Norfolk, including Fakenham, Litcham and King's Lynn.

Steve Finch, head of Norse grounds division, said: "I've been Neville's boss for most of those 46 years and he's been a really hard worker and very conscientious about his work.

"He's never caused any problems and has always enjoyed his work, which must be why he stayed in the job so long."

Mr Jackson, who now lives in Pott Row, intends to carry out some voluntary work for the National Trust at Oxborough Hall during his retirement.