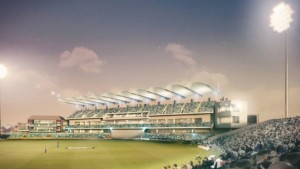 An investor prepared to invest £35m in Leeds' Headingley stadium has been found, the city council says.

Council leader Judith Blake said a previous scheme to fund the work had "gone" and now the authority was ready to broker the new deal.

The council had withdrawn a £4m grant from the work, leaving Yorkshire County Cricket Club facing being unable to host international matches after 2019.

However, Ms Blake said she was now "confident we have a way forward".

The stadium hosts cricket, rugby league and rugby union fixtures.
Mark Arthur, the club's chief executive, said a financial services company was prepared to build the new facilities and rent them back to the clubs.

The plan includes a new south stand on the rugby ground and a new joint stand overlooking both the rugby pitch and cricket ground.

Mr Arthur said the new deal "would safeguard international cricket at Headingley for the foreseeable future".

The club plans to start "stripping out" the stand at the end of May and work should be finished before the 2019 cricket season, allowing the ground to host games in that year's world cup, said Mr Arthur.

'Work to be done'

The plans were originally unveiled in January 2016.

Gary Hetherington, chief executive of rugby league side Leeds Rhinos that is also to invest about £5m, said it was the sort of decision "made once every 100 years" and there was "still some work to be done".

The council withdrew a £4m grant on 23 March that was part of the previous financial plans.

The details of the latest investment are still to be discussed at a meeting of senior councillors in April.