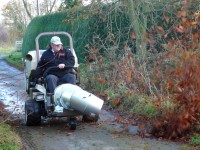 Rustons Engineering is now offering a range of attachments for the Grasshopper zero-turn mowers it distributes in the UK, including leaf blowers, sweepers, turf edgers and aerators.

The leaf blowers are available for the Grasshopper 700 and 900 series and feature a powerful PTO-driven fan unit that produces almost 4500 litres of air a second at up to 240kph, enabling them to clear leaves and other debris easily from paths, golf courses, parks and other amenity areas. The nozzle can be adjusted a full 360° electrically from the seat, allowing the driver to blow autumn leaves off trees and complete leaf-clearing in a single visit.

The Grasshopper 900 series mowers can also be fitted with a bi-directional sweeper that can also be used for light de-thatching of turf. The working angle of the 600mm-diameter brush can be adjusted from the driver's seat up to 25° left or right, and brush height can be adjusted by the driver electrically. A jack stand is fitted to allow quick, safe installation and removal.

The Edge-Eze path edger greatly reduces manual finishing work in parks, golf courses and other large areas of turf by creating a clean, sharp edge alongside footpaths. The cutting blade is reversible to allow edging from the turf or path side. Models are available with electric or manual lift.

The Grasshopper Aera-Vator aerators, which have a working width of 1.52 metres, incorporate 83mm-long solid tines that oscillate as they penetrate the ground, breaking up compacted soil without leaving cores on the surface. The design creates 65 holes per m², allowing air, water and nutrients to the root zone.

When rough grass areas rather than mown turf need to be cut, some Grasshopper models can be converted to flail mowers. The conversion gives a 1.4 metre working width. Other options for the mowers include mulching kits and Powervac collection systems in low-tip and high-tip versions.