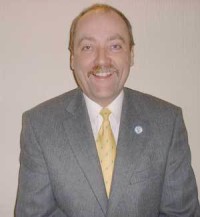 Vitax have appointed Paul Taylor as their new Representative in the North of England.

Paul, a Yorkshire man living in Halifax brings a wealth of experience to the role having worked in the industry since leaving school. Starting as a trainee groundsman he served 17years in greenkeeping, rising to become head greenkeeper before switching to a representative role at Rigby Taylor in 1989.

"This seemed like a natural progression," he says. "By this time I thought that I knew something about the business and as a rep. you act as a support system to a lot of people."

Having recently returned from virtually a two-year sabbatical with his wife, touring Europe by Landover, Paul views his new position as a "lovely challenge."

"Vitax is an established company with a good standing in the trade," he continues. "The job provides a great way of meeting our customers and distributors and getting everybody involved."

Clive Williams, commercial sales manager for Vitax, who has known Paul for many years, praises his experience and expertise. "Paul is B.A.S.I.S. qualified with a thorough knowledge of the industry," he declares. "I'm sure that he will consolidate and expand Vitax's interests in the northern counties."