0 New Ascot - From the Horse's Mouth

New Ascot- From the Horse's Mouth 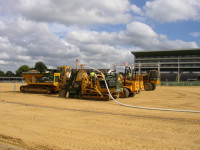 "A resounding success" has been the common verdict following the opening of the new grandstand and race track at Ascot in June.

White Horse Contractors Ltd completed the track reconstruction and realignment works at the historic Racecourse, as part of the extensive £210m redevelopment programme. The new facility has already received high acclaim from jockeys and racegoers alike. None other than Frankie Detorri was reported to have claimed "it's probably the best racetrack in the world!" 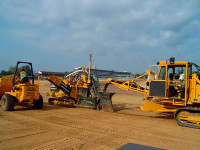 Track works commenced in May 2004 and, at times, the rigorous demands of a project of such immense scale would test the company's extensive management and resources.

Robert Donald, Managing Director of White Horse Contractors Limited, remembers "my initial discussion with Robert Everett of the STRI started over 5 years ago. Robert and I investigated the physical practicalities of a project of this magnitude. The resources required and scale of operations would alone determine the project as a world leader and a one off. My favourite analogy is to describe the Track construction as an 11.5 hectare golf green, complete with intensive drainage, pop-up irrigation, a gravel raft and rootzone layers."

At the start of the project, company owned laser grading D6M LGP bulldozers moved in to trim the sub-formation. This was followed by the installation of almost 17 miles of pipe drainage to the sub-base, using specialist Mastenbroek sportsfield trenchers and Househam backfilling hoppers.

Over 90,000 tonnes of materials, sand and aggregates would be prepared and laid in the construction of the track to the highest tolerances. Again the D6M bulldozers, fitted with lasers and computerised 3D modelling equipment would be used. Once the sub-base was formed and the drainage and irrigation systems installed, over 75,000m² of turf was laid on the flat track, using turf grown especially for Ascot.

John Gosden, international trainer, said 'I was impressed by the base and what goes into the ground before the turf is laid'. 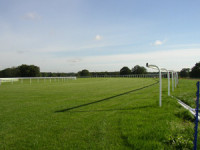 Incredibly the straight mile was moved 42 metres to the north and the decision to construct an underpass, diverting the Winkfield Road, has eliminated the need for horses to cross the old road during race meetings. The underpass went unnoticed by the jockeys as they galloped over this section of the new course; they commented that there was no discernable difference in the going, even though the horses are effectively crossing a bridge.

Ascot has been transformed into an international Horse Racing venue of world class calibre. Steve Greene, Contract Director for the project commented:

"White Horse Contractors were delighted to be appointed to this highly prestigious project, which is the largest and most technically complex sportsturf construction scheme of its kind in the UK. The successful completion of the scheme would not have been possible without the unstinting hardwork and dedication of the entire team."

Ascot Racecourse was committed to producing what could arguably be described as the best horse racing facility in the world. There can be little doubt now, that this ground breaking project, which stretched the imagination and resources of its architects and contractors has succeeded - in fact the track is already being talked of as 'the best racing surface in the world'!

Robert Donald concluded "now that our part of the project is complete we will enjoy watching the racecourse develop its new potential. White Horse Contractors are proud of their contribution to its undoubted success".