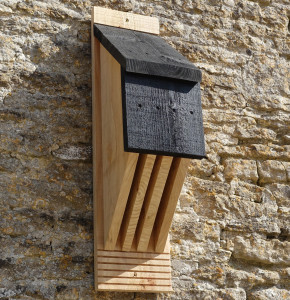 The Vincent Pro Bat Box was created to increase the number of available habitats for a wide range of bat species.

Designed by Colin J Morris, one of the UK's leading bat researchers, the new bat box has undergone extensive testing and comparative trials to prove excellent performance and occupancy rates with at least seven local bat species, including the Barbastelle and Common Pipistrelle.

The Vincent Pro Bat Box is set aside from other similar products as it is specially designed with a cluster zone and three vertical entrance chambers in various sizes to attract a range of bat species. The box is also designed to offer a rough landing surface and ladder making it particularly easy for all bat species to access and use, and requires minimal cleaning as droppings are forced to drop to the ground through the three entrance gaps.

The sturdy wooden structure is created using FSC timber and is treated using only water-based paints and sealants to make it an environmentally friendly choice for a new bat box.

As bats do not build their own roosting sites, it is important that all manufactured bat boxes are created to offer a durable and practical site for bats to use all year round. For this reason, Wildlife World have painted the chamber roof and elevation panel black to block light and absorb heat to offer a warm breeding site for female bats during the summer. The box can also be moved and placed in a cooler area to provide a suitable roosting site for hibernating bats in the winter months.

Wildlife World worked closely with the Vincent Wildlife Trust to ensure that the new box offers the best and most functional bat roosting site to prevent the UK bat population from declining any further. This sudden decrease is due to many factors as a result of the rise in development works causing lack of roosting sites, feeding habitats, flight lines and an increase in artificial light which reduces a bat's hunting time. By offering an artificial roosting site in the right conditions, it is possible that the number of habitats will improve, along with the population numbers.

The Vincent Wildlife Trust has been pioneering mammal conservation for 40 years, and manages 40 priority bat roosts, many of which have international significance. The wildlife trust undertakes surveys to help identify the current status of mammal species that are considered under threat or concern. The organisation also delivers conservation and monitoring of many wildlife species, predominantly bats and members of the weasel family, as well as providing education on the benefits of conservation.