0 New Chairman outlines his plans for the TGA

New Chairman outlines his plans for the TGA 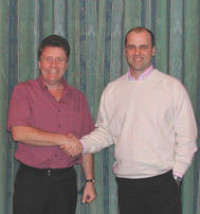 Stephen Edwards of Inturf took over the Chairmanship of the Turfgrass Growers Association (TGA) when members gathered in Cardiff for its Annual General Meeting.

His first task as Chairman was to present his predecessor, Chris Carr of Q Lawns, with a gift in recognition of his service to the Association during his two-years at the helm.

The thirty members who attended discussed a variety of topics including research and development, the forthcoming turf show and widening the appeal of membership through PR and promotion.

"I'm committed to the turf industry as a whole, not just those growers who choose to be members of the TGA", commented Stephen. "but as Chairman I plan to encourage the TGA council to work proactively with existing members to encourage new membership and to promote its benefits to both the grower and the end-user.

As an Association, we'll be carrying out a review of our BS 3969 quality standard, which was last revised in 1998 and hope to channel some of our reserve funds into a research project based on the findings of our annual market survey."