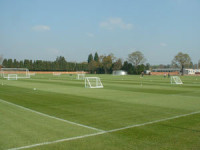 A tried and tested mix of Barenbrug grass cultivars has been used in the turf for six outdoor pitches at Chelsea Football Club's new £20m training academy, in Cobham, Surrey.

The 62,000 sq/m of turf for the new site was grown by specialist sports turf growers Lindum Turf. Company MD Stephen Fell explains the challenges of the project: "Due to the tight time-scale involved in the new build, it was necessary to lay turf for the pitches rather than seed them. We created a special sports grade turf which was supplied as a washed turf to be laid on the fibre reinforced rootzone. The dual advantages of rapid rooting and the avoidance of importing other soil particles made the washed product the ideal solution.

"We selected a variety of Barenbrug cultivars for this turf. It's made up of Barlinda perennial ryegrass, which has excellent wear tolerance, Romance, another ryegrass ideal for heavy duty sports use, Limousine smooth-stalked meadow grass, and Barcrown slender creeping red fescue. We find this mixture produces a strong, dense sward with great colour."

Stephen adds: "Barenbrug seed suits our purpose because we select from the highest-rated varieties for wear tolerance, fineness and density of leaf and diseases resistance. We also insist they are in the top range of the STRI list for football applications. This is why we consistently use Barenbrug products."

Once the turf was laid, the pitches were quickly ready for play - five weeks for phase one and six weeks for phase two. Chelsea FC's head groundsman Jason Griffin is delighted with the results. "The grass looks fantastic and plays well," he says, "and the directors and players have been very complimentary. I'm very impressed with the quality of the grass and how quickly it was ready for use. Lindum Turf has worked with us for over 10 years and they consistently provide an exceptional standard of turf."

Chelsea's new academy is vital in its quest to develop one of the best youth set-ups in Europe, as well as playing a major role in their 'football in the community' programme. When completed in 2006, the state-of-the-art sporting complex will include 20 full size outdoor pitches, an indoor pitch, gym, pool and the finest physiotherapy facilities.