by Lucy Nicholls
in Machinery & Mechanics, Industry News, and Football
on 19 Aug 2015 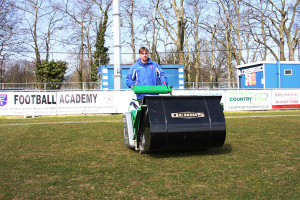 Margate, the birthplace of the British seaside is undergoing something of a renaissance and the town is set to boom. So too is the town's football club after a new owner injected new ambitions into the team; starting with improving turf maintenance equipment with the purchase a Dennis Premier.

Plans are already underway to transform the area into a fantastic place to live, work and visit and the town's beloved football club has also received a boost, giving the Margate faithful something to cheer about from the terraces.

"Prior to the new owner coming in, Margate FC was a non-league Ryman club, quite content to finish mid-table. We have always had a hard-core set of fans and on a big game we got an average of 600 in attendance. But that would often go down to about 150 depending on results.

"However, the new owner started the investment process, bought some really good players and crowds began to grow; we are now seeing about 700 in the stadium every week. The long term plan is to achieve Conference football possibly even as high as reaching the football league," said Graham Ives, head groundsman at Margate FC.

Graham has been the head groundsman at Margate for four years now and when the new owner came in he seized the opportunity to purchase new turf maintenance machinery.

"I was fortunate in the sense that one of the owner's first decisions was to upgrade the machinery. When I was presented with the opportunity to choose a new machine I didn't even look at any other mowers - I was set on Dennis.

"I've always used Dennis machinery, whether it be on bowls greens, cricket wickets or football pitches. The previous mower I had was from Dennis and even though it was 35 years old it kept doing a good job; I just wanted an upgrade.

"We went for the Dennis Premier model because a lot of Premier League and Football league clubs use them so we know that they are used professionally at a high level," he said.

As Graham says, the Dennis Premier is widely used by a number of professional clubs due to its renowned quality of cut as well as other great features. With an impressive 30" (76cm) or 36" (91cm) working width, groundsmen praise the robust Premier model for being highly manoeuvrable and comfortable to operate. Its six or eight bladed cutting cylinder is also extremely durable, providing a precise cut with very little maintenance.

"It really has made a major improvement to the pitch, the handles and the pully system on the side makes it so easy to turn; which I feel is the Premier's best feature - you just pull the handle and it turns virtually on its own.

"Presentation is very important to me and the Premier is great for striping; it's got the lovely heavy roller so it stripes the pitch beautifully. Everything about it is very slick; it's the best machine I've used and the pitch looks immaculate, he said.

So with plans for a new great town on the horizon, an optimistic future for the football club and now a new Dennis Premier to work with; what else could Graham wish for?