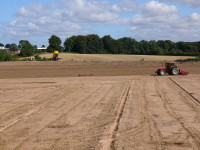 Nearly fifty young footballers will have a new, state-of -the-art pitch next season thanks to a restoration and re-development project currently underway in North East Derbyshire.

Phil Bradbury, Vice chairman of Clay Cross and Danesmoor (Miners Welfare) Junior Football Club says that up until now his three teams, under 12s, under14s and under 18s have been playing on a ground which over-laps the local, adult cricket pitch. "These grounds are part of the old Bywater Foundry site," he says. "They're not bad, but they have a bank on one side and in bad weather the top end gets boggy. If it rains heavily matches don't get played."

Bywater, once a major employer in the area has long since shut down, and in March last year the 230-acre site, including the sports fields was bought by property developers Cavendish Estates (London) Ltd. and Maximus Securities plc. Bryn Hopkinson, a director of the group explains that the Bywater holding included Egstow Quarry, which had, over the years been an opencast mine, and latterly a tip. "We envisaged a mixed, commercial and residential development on the site of the old foundry and the present sports fields," he explains. "This would have robbed the area of it's present sporting facilities, so we decided to fill in Egstow Quarry and put new sports fields on one half of it and an amenity country park on the other. "

David Gooch, a landscape architect with Maslen Environmental Ltd. based in Saltaire, Bradford was appointed to design the restoration scheme. "The plans, which included the re-location of the present sports fields to Egstow Quarry were submitted to Derbyshire County Council last Nov/Dec and approved, in the New Year," he says. "We've been involved from the start when Cavendish estates bought the land, and as well as producing the restoration scheme we've been responsible for tendering and contract management. J Pugh-Lewis Ltd. were brought in to construct the new pitches and had an input into the final layout and specification."

"Our brief was to construct both a new football and new cricket pitch on half of Egstow Quarry," remembers James Pugh-Lewis. "The Quarry was being managed as an inert landfill site to build up the sub soil levels, and we levelled approx 2.6 hectares and covered this with good quality top soil to a depth of 7 inches. We installed pipe drainage over the entire site with drains at 5 metre centres for the football pitch and 6 metre centres on the cricket outfield. In all we used about 4,500 metres of pipe." 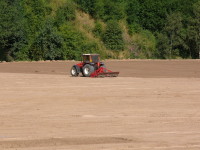 Having built a new cricket square, which took around 50 tonnes of Kettering Loam, Pugh-Lewis cultivated and seeded the whole area. Once the grass is sufficiently established J Pugh-Lewis will return to install sand bands on the football pitch to improve further, surface drainage. "This is a high specification job which has to satisfy the standards of Sport England," explains Bryn Hopkinson. "We'll be building a new pavilion and installing car parking and changing facilities. Clay Cross juniors should be playing on their new pitch by October at the latest."

For further information on the construction and drainage services of J Pugh-Lewis, contact the company on Tel: 01773 872362 or visit their website at: www.pugh-lewis.co.uk